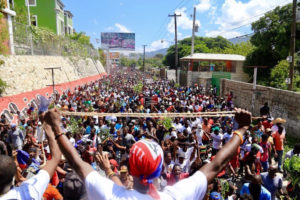 Pierre Labossiere, who has long had his finger on the pulse of his native country Haiti, writes in “Resisting COVID-19 in Haiti” that Haitians can see through the lies broadcast by the rulers of their country: “They know that the vast majority of the money raised around the world after the devastating 2010 earthquake, estimated at $11 billion, never reached them. They … have no faith in a government that has stolen elections and then ramped up repression even as the coronavirus has begun its deadly march.”

Because I’m familiar with the struggle in Haiti I know what he says is true. Because I’m familiar with the political landscape of my own country, I have my doubts whether my compatriots have the same clarity of vision as the Haitians. Are they seeing through the lies that spill out of Washington every day? Do they realize that the vast majority of the money taken from taxpayers to bail the country out of recession in 2008 benefitted the banks that were too big to fail, but not the people, who lost their homes in foreclosure? Are they aware that today’s bailouts help an airline industry that pays its CEOs $5 to $10 million dollars a year? Our taxes are coming back to us in stimulus checks of over a thousand dollars. But the checks going out to the airline executives are for millions. And do our taxpayers wonder what it would look like today if the $740 billion a year we spend on war were going into health services and research?

Before the United Nations ever admitted responsibility, the Haitian people knew the UN was responsible for the cholera epidemic that swept across the island. Does the American voter understand who was responsible for ignoring the gravity of the COVID-19 pandemic—blaming first China, then the World Health Organization, for its spread? Are they smart enough to cast blame on the U.S. president for his indolence, his ignorance, his arrogance, and his responsibility for making the United States the epicenter of the pandemic? What about the shortage of test sites, PPEs, ventilators, and hospital beds? Will they demand that he take responsibility for the upward of 30,000 American deaths on record as of April 15, our historical tax day?

Pierre Labossiere reports that people in Haiti have no faith in a government that has stolen elections and then ramped up repression even as the coronavirus has begun its deadly march. Have voters in the United States figured out yet that the electoral process is rife with voter suppression, polling place manipulation, unreliable electronics, hacking, voter intimidation, and corporate bribes, as well as threats of foreign interference? Do they feel safe from repression in a country where the chief executive has no respect for the Bill of Rights and the Congress tolerates his unlawful behavior?

As Labossiere points out, the struggle against the coronavirus demands that we stand in solidarity with each other, across all borders, because it is a world-wide fight. The Haitian people have recognized a dual crisis: a corrupt and repressive system, and COVID-19. “It is essential,” he says, “that we see their struggle as our own.” Indeed, it is essential that we learn from them how to interpret our own crisis, so that we can be strong partners with them in the struggle for justice and health.