Since the electoral coup d’etat that put in power the legal bandits of the PHTK party (Tet Kale/Skin Heads), Haiti has been experiencing progressively worse conditions:  repression, corruption, kidnappings, and federations of gangs that are spreading terror by massacring residents of working-class neighborhoods, burning down their homes and forcing people to flee their neighborhoods. One of the PHTK’s last-ditch moves is to now hastily organize another election/selection so that they can remain in power. This means that they will succeed themselves on the corpses of the people. 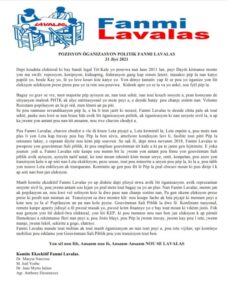 Things are indeed grave, but the majority Haitian population, including all sectors of society, are conscious of the calamitous situation that the PHTK and its international partners have brought upon the country and they have decided to fight to change the system.  The determination and resistance of the population remain steadfast, but the enemy is powerful.

In total accord with the demands of the people and to provide all necessary support, Fanmi Lavalas made the decision to have discussions with all sectors because we believe that it is through an exchange of ideas with all the political organizations and those within civil society that we will find a common accord so that all together we will overturn the cauldron.

For Fanmi Lavalas, overturning the cauldron means the destruction of this predatory, criminal and imported government, and replacing it with a government that works to provide needed services to the people, improves living conditions, facilitates the return home of the daughters and sons of Haiti and regains our dignity as a sovereign people.

That is why, since November 2018, Fanmi Lavalas has proposed a government for the public’s safety, “Sali Piblik,” to replace the PHTK government that has never had any legitimacy. Fanmi Lavalas has since remained steadfast in its resolve to find an accord to form a “Sali Piblik” government with Haitians, authentic Haitians, known for being serious, honest and competent, to ensure a transition from the present government of exclusion and exploitation – all for the minority, nothing for the majority – to a new government of inclusion and transparency. This process will be solidified by the population choosing its representatives through honest and free elections.

Members of the Executive Committee of Fanmi Lavalas have for a few months been engaged in discussions with other organizations and representatives of civil society to reach agreement on how to put these changes in place. Just like the broader population, Fanmi Lavalas believes that the real solution to the crisis can only come through changing the system. No hasty election is possible in this moment. This transition must show clearly that we have made a complete break with this plundering government that has reduced the country to its present condition! The people are not about a patch-up job.

The Sali Piblik government will be tasked with: organizing a national conference, rebuilding the judicial system, prosecuting the massacres and financial crimes, and bringing justice to the people who are the victims. We must have a new electoral law, a new provisional electoral council (KEP) that will organize free and fair elections in order for democracy to bloom again in the country, for justice to spread, for people to have employment, housing, food, schools, and safety in their communities.

Fanmi Lavalas calls on all militants and the members of the organizations throughout the country to remain vigilant and to continue to mobilize with the demand for a genuine transition through a Sali Piblik Government.

Alone we are weak,
Together we are strong,
All Together WE ARE LAVALAS