Haiti Action Committee is honored to circulate this statement from Fanmi Lavalas, the people’s party of Haiti. As threats of a new foreign invasion ramp up, Lavalas states, in the clearest terms, the need for continued popular mobilization to produce a genuine Haitian solution to the crisis. We hope you will read it and circulate it widely.

Haiti is going though one of the most difficult periods in its history. But this grave situation has begun long before today. The country, specifically the majority population, the main victim, has been suffering greatly as a result of one coup d’etat after another, meddling by the International community, corruption, impunity and a government that is in the service of the economic mafia.

We must remember that since the kidnapping/coup d’etat of February 29, 2004, the occupation of the country has caused more corruption, more massacres in the popular/working-class neighborhoods, more impunity, more hunger, more misery, more actors in the economic sector who have allied themselves with gangs that are increasing the digging of graves daily. Many billions of dollars were spent for the occupation, and for what? The situation has continued to worsen, as we all can attest. This calamity is the result of the 2004 coup. 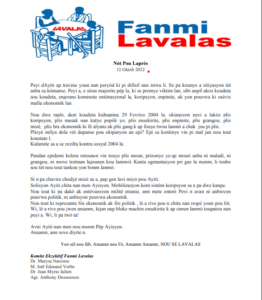 While the cholera epidemic has re-surfaced to kill more people, prisoners are dying of disease, starvation and mistreatment day and night. When it comes to the excessive cost of gasoline, it has fallen upon us like a deadly bomb.

If we do not overturn this cauldron of misery, there will be no better life for Haiti. The solution for Haiti is in the hands of Haitians. The mobilization against the system of corruption must not stop. All of us who are opposed to a foreign military intervention, let us put the well-being of our Country before any ambition for political power or any ambition for economic power.

All of those honest forces who represent the economic and political strength of our country, the time has come for us to sit down with respect for each other.

Yes, the time has come to find together how we will stop the machine of insecurity that is spreading death everywhere in the country. Yes, it is not too late!

The future of Haiti is in our own hands, Haitian People. Together, let us safeguard our dignity.

Alone we are weak, Together we are strong, All Together, WE ARE LAVALAS