NOTE: This article was written last April. The repression described below continues throughout the country.

On January 3, Haiti’s Electoral Council (CEP) sealed the steal by confirming Jovenel Moïse as president of Haiti. A massive police presence resembling martial law suppressed street protests—attacking demonstrators who had been in the streets daily since the November 20 election—with a stinging blue foam added to water cannons. A potent new tear gas burned and stung the skin. A tear gas attack on a poor neighborhood at 1:00 AM last November 29 suffocated three infants to death.

In 2017 Haiti finds itself with a “president” who would never have won an honest election. A tiny number of ruling families backed by the United States, Canada, and France, operating through a United Nations military occupation, has imposed an imperial ruler on an unwilling population through a process they called an “election.” Everyone in Haiti knows this, but in the United States, we don’t. International media reported the Moïse “victory” as a matter of legitimate fact, based on phony numbers released by the CEP. They either neglected or minimized the almost daily massive protests and provided zero background or context, thus becoming willing participants in the fraud, and giving “fake news” a whole new dimension. 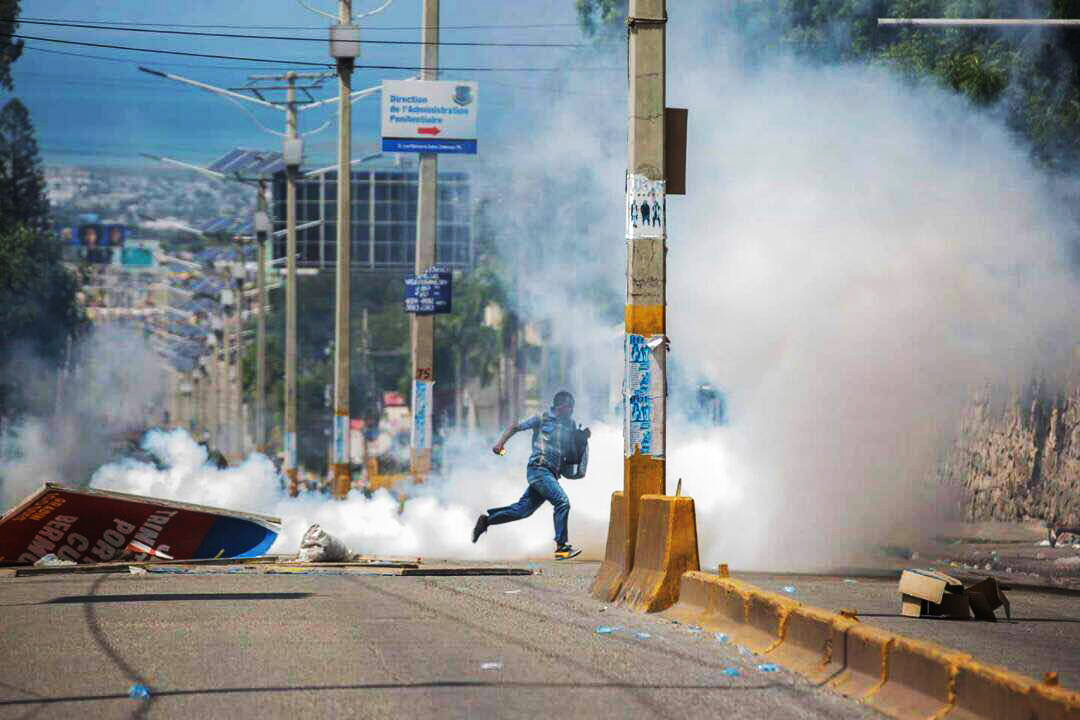 The only reason the November 20 election even took place is because massive daily street demonstrations protesting two fraudulent elections in 2015 forced a new election in 2016. The demonstrations also forced the hated Hillary Clinton-imposed president, Michel Martelly, to leave office on schedule on February 7, 2016, despite various maneuvers to attempt to extend his term.

The Fanmi Lavalas Party, founded by former President Aristide and long recognized as representing Haiti’s poor majority, organized a Dignity Caravan that toured the entire country throughout the campaign with their candidate, Dr. Maryse Narcisse, often accompanied by President Aristide, attracting huge enthusiastic crowds everywhere they went. Nevertheless questionable polls announced the leading candidate to be Jovenel Moïse of Martelly’s PHTK Party. Clearly Haiti’s majority poor, who turned out by the thousands at Lavalas campaign rallies and demonstrations, were not consulted in the polling.

Léopold Berlanger, a longtime Washington agent, was selected to become head of the CEP to oversee the elections. He is a former director of the USAID-funded Radio Vision 2000, and a frequent recipient of grants from the National Endowment for Democracy (founded to impose governments chosen by the US on the people of other countries). The CEP then appointed sweatshop entrepreneur Andy Apaid, a leader of the movement to overthrow Aristide in 2004, as a counselor to the Vote Tabulation Center. The United Nations Office for Project Services (UNOPS) supervised the election and transported the ballots (the UN having militarily occupied Haiti since 2004).

Election day arrived, and it became obvious that a massive coordinated campaign of voter suppression and fraud had taken place. Voters needed an official voter ID card, but many people never received them, so they couldn’t vote. The number of voting stations was significantly reduced, especially in rural areas, so people had to travel for miles with limited public transportation to try to vote. When they arrived, their names weren’t on the lists outside the polling places. Or if they were, their names weren’t on the lists inside the station. Other people were told to vote in cities far away. A countrywide electrical power outage one hour after the polls closed caused two hours of darkness as ballots were being transported and counted. Nevertheless, enough people had managed to vote that ballots were later found uncounted and discarded.

The CEP announced that not only had Jovenel Moïse—the clone of Martelly who had been forced to leave office by massive street demonstrations—won an absolute majority of the vote (55%), but he had finished first in Fanmi Lavalas Party strongholds, including the very neighborhoods where many of the demonstrators lived. The international media promoted this fraud, reporting the announced election results as “official,” not even mentioning that the vote isn’t official until losing parties are given the chance to appeal the results.

The parties that were reported to have finished second, third, and fourth in the vote did appeal the results. An electoral commission/court (BCEN) appointed by the CEP was designated to verify the results, with participation of the three contesting parties in the process. Senator Yvon Feuille, a top Fanmi Lavalas expert on electoral documents and a member of the Fanmi Lavalas verification team, reported on Radio Timoun that first, the verifiers—including the three contesting political parties—were allowed only five minutes, far too little time, to review each of the several sets of documents from each polling station.

He went on to report the fraud was so grossly blatant and massive that in one small sample being verified, 85% of the votes for Jovenel Moïse were disqualified. In other samples, verifiers found numbers changed or added. By the third day of verification, CEP officials violated the electoral law Article 187 by changing the procedures so that the contesting parties could no longer participate in the verification but had to stand behind and merely watch. The three contesting parties and most observers left the room at this point, leaving three-quarters of the election tally sheets not processed as required. It became clear that the CEP had no interest in true verification—their mission was to legitimize a preordained electoral coup d’état.  On January 3, the CEP announced that Moïse had won the election.

To add to the charges of fraud, Haiti’s Central Financial Intelligence Unit (UCREF) issued a report saying Jovenel Moïse may have “manipulated funds that have nothing to do with his businesses” (also known as money laundering) in his fourteen bank accounts. Investigators are looking into allegations that he received more than $1 million in loans that were quickly approved before he had even filled out all the paperwork. They also seek information about his ownership of 45 vehicles and his bank transactions, including frequent large daily cash deposits that exceeded the amount that needs to be declared to authorities, and checks written for large sums made out to cash with no named payee. Moïse appeared before a judge for four hours on January 25 and denied the charges.

Furthermore, the CEP allowed known criminals, death squad leaders, and drug dealers to run for parliament. The United States called for the arrest of 2004 coup leader and narco trafficker Guy Phillipe on January 5, then had him extradited to the US after he was “elected” to the Haitian Senate. In 2005, the DEA filed a sealed indictment charging Philippe with conspiracy to import cocaine and money laundering, but did not move to have him arrested for more than ten years.

Youri Latortue, the leader of the Haitian Senate, whome the US Embassy described in a secret cable released by Wikileaks as possibly “the most brazenly corrupt of leading Haitian politicians,” has been accused of involvement in drug trafficking, kidnapping, and other illegal activities. These are just two of many examples of the types of candidate the CEP has allowed to run for office and govern Haiti.

Fanmi Lavalas has issued a communiqué rejecting the fraudulent electoral results and calling on the people to mobilize against this massively orchestrated fraud. Street demonstrations continue daily, guided by the slogan “Nou Pap Obeyi!” (We will not obey!), as US/UN-trained and supervised Haitian police brutally attack demonstrators with stinging tear gas, blue foam water cannons, bullets, batons, and rifle butts. Two small demonstrations by Moïse supporters, however, proceeded without any repression.

Meanwhile, Moïse has announced his administration will build more prisons and support a law to limit press freedom, which particularly threatens independent community media, including Radio Timoun and Tele Timoun, the radio and television stations housed at the Aristide Foundation for Democracy.

On February 8, Fanmi Lavalas held a press conference. Their presidential candidate, Dr. Narcisse, said, “The Haitian people did not accomplish February 7, 1986 [the overthrow of the dictator Jean-Claude ‘Baby Doc’ Duvalier] to end up in this situation today….The political organization Fanmi Lavalas…rejects this electoral coup d’état that resulted from an organized plot by the Provisional Electoral Council. Despite the present hardships, Haiti will triumph! We have in us this collective energy of a people determined to confront economic and sociopolitical challenges. We must have a state of laws, not a state where justice is trampled underfoot! We the citizenry, victims of institutionalized injustice, strongly demand that the grievances of the people must be addressed….The dirty money that financed the coup d’état cannot buy the majority that has dignity.”

On March 20, uniformed police officers fired on a vehicle carrying Aristide and Dr. Narcisse, resulting in a number of wounded, as tens of thousands of demonstrators marched beside them to protect them. No Haitian governmental or international official has denounced this assassination attempt as of this writing. The process of re-imposing and consolidating a renewed Duvalierist dictatorship marches forward, under the US/UN occupation that began with the 2004 coup d’état.

In their 1984 book, Demonstration Elections, Edward Herman and Frank Brodhead describe the template through which the United States Government uses elections as a tool of control. Their purpose is to create the illusion of democracy and “demonstrate” to the outside world, especially the US public, that the people voting really support the puppet governments the elections are being held to legitimize. In the case of Haiti in 2017, the demonstration election has become an electoral coup, with no shred or even pretense of democracy. Yet Haitians fight on.

Haitians provide an EXAMPLE and need our massive solidarity.

They’re in the streets daily, often at the risk of life and limb, often wet and hungry. They hold true to the vision of their 1804 revolution that defeated Napoleon’s army and abolished chattel slavery, and they refuse to give up. We could learn from their example.

We need to change our entire media narrative about Haiti.

Poor? Haitians have been made poor. Haiti is rich. Its natural resources include oil, bauxite, copper, calcium carbonate, gold, silver, marble, and hydropower. According to some government sources, Haiti is poised to make over $20 billion mining minerals such as gold, copper, and silver, but international forces steal all of it. Haiti is not poor. Haiti is exploited.

Haiti is also rich in human engagement with participatory democracy. Haitians may be denied schooling, but they know their history a lot better than we know ours. They know the kind of society they want to live in, and they work hard to create it.

Out of control mob violence in the streets? No, that’s media-speak for organized resistance—people risking their lives to demand justice, democracy, and a fair economy, and to fulfill the promises of their revolution of 1804, which brought forth the first and only nation ever created by the formerly enslaved overthrowing their slaveholders. How else can Haitians end 213 years of enslavement by another name and bring forth the society they have fought for continuously, against the power of the “international community,” from eighteenth century until today?

It’s time to look at Haiti in a new way.