Milestone at Haiti’s University of the Aristide Foundation by Leslie Mullin [originally published in Counterpunch, April 2018]

South Africa, where they lived following the 2004 coup d’etat that overthrew Haiti’s democratic government. On their return, they began to rebuild the University of the Aristide Foundation [UniFA] whose land and buildings had been appropriated, converted to military barracks and trashed by U.S. and Brazilian troops during the coup.

On the 7th anniversary of that historic return, UniFA held its first graduation ceremony in Port-au-Prince, Haiti. A delegation of Haiti solidarity activists from the U.S. was honored to be there representing Haiti Action Committee, Black Alliance for Just Immigration, Global Women’s Strike, and the Haiti Emergency Relief Fund. 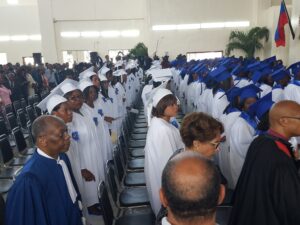 In a joyous celebration attended by over 1000 people, UniFA graduated 77 doctors, 46 nurses and 15 lawyers. The setting was beautiful, the stage decorated with flowers and banners in the blue and white colors of UniFA. The famed Philharmonic Orchestra  of Sainte-Trinite played Haitian folk music as well as classical music throughout the event. Cameras were everywhere to record the occasion, which was widely and prominently reported in Haitian media. The UniFA choir, joined by the entire audience, sang Haiti’s national anthem, and later the song of UniFA. Two young men carrying the flags of Haiti and UniFA proudly led the procession of Faculty at the opening of the ceremony. As a child, one of them – soon to become a UniFA graduate – lived at Lafanmi Selavi, the center for street children founded by Aristide when he was a priest. His success is an example of the university’s commitment to overcome social barriers limiting access to higher education. “Education sans exclusion” – education without exclusion – is a central theme of UniFA, imprinted on its logo and manifest in every detail of this remarkable event. The exhilaration that infused the occasion spoke to UniFA’s broader commitment, expressed by Mrs. Mildred Aristide,“to break down the long tradition of exclusion of the poor majority in Haiti from access to higher education.”

At the podium, Dr. Jean-Bertrand Aristide, President of UniFA, stood to address the gathering. His speech emphasized that the University’s role is not only to instill academic knowledge, but to promote ethical lives and nurture students’ relationship with their community. He spoke of the African philosophy of Ubuntu, which recognizes that the essence of social consciousness can be expressed as “I am because we are” – a person becomes a person through community. Dr. Aristide said that “it is not easy to eradicate evil at a macro level. But, on a micro scale, you can fight it rationally.” He noted that, “on a global scale, science is advancing, consciousness is declining. May your professional conscience contribute to the awakening of social consciousness.”

To highlight this point, towards the end of the ceremony, each graduating class – MDs, nurses, and lawyers – pledged their commitment to serve their 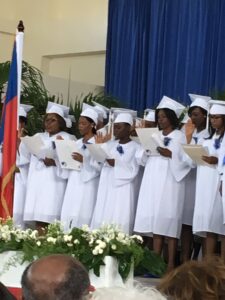 people. In a country with fewer than two doctors for every 11,000 people, UniFA’s graduate physicians are already practicing medicine in regions throughout Haiti where formerly there were no doctors. It is a hopeful victory in difficult times.

After all the graduates received their diplomas, there was a “passing of the torch” ritual during which graduates from each program passed a flaming torch to a student from the upcoming class. Gifts were presented to the valedictorians, and finally, the graduates celebrated with friends and family under an outdoor pavilion on the beautiful campus. Long years of effort to reach this day were visible in faces filled with grace, joy and pride.

One of UniFA’s chief architects, Mildred Aristide, an attorney and Haiti’s former First Lady, describes the university’s broader mission to nourish democratic space within an undemocratic country: “Haiti vitally needs a safe space where young people can come together, think country and construct a future under difficult circumstances…An institution that will address national  issues and seek viable solutions to national problems. Dreams of working, prospering and changing Haiti – not chasing after a foreign visa or a job with a foreign NGO. This is UniFA’s commitment.”

UniFA was born out of Haiti’s grassroots struggle for democracy during President Aristide’s second administration in 2001. It recruited medical students from poor families in each of Haiti’s nine departments, equal numbers men and women. Talented young people from rural Haiti previously found it nearly impossible to attend medical school. UniFA sought them out, asking only their commitment to return to work in communities throughout Haiti after completing their training. By 2004, 247 medical students were studying medicine at UniFA. A School of Nursing was planned to open in the fall.  The February 29, 2004 coup d’etat brought all of this progress to a halt. The faculty and staff were forced into exile or hiding within the country.  United Nations and U.S. military forces drove the students off campus, turning the site into military barracks. The campus remained under the control of foreign forces until 2007 when it was officially turned back over to the Aristide Foundation for Democracy. 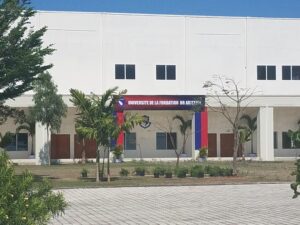 The University opened with three goals: 1) to prepare doctors to care for the poorest of the poor; 2) to increase the number of doctors practicing in rural areas; 3) to break down the long tradition of exclusion of the poor majority in Haiti from access to high education. Today, UniFA has expanded its scope to offer degrees in medicine, nursing, dentistry, engineering, law, physical therapy and continuing education.

From exile in South Africa, a month before his return, President Aristide spoke about education: “Education has been a top priority since the first Lavalas government – of which I was president – was sworn into office… on 7 February 1991 (and removed a few months later). More schools were built in the 10 years between 1994, when democracy was restored, and 2004 – when Haiti’s democracy was once again violated – than between 1804 to 1994: 195 new primary schools and 104 new public high schools constructed and/or refurbished.” The Aristide government mandated that 20% of the national budget be directed to education. For the first time in history, Haiti began to implement a Universal Schooling Program aimed at giving every child an education.

Aristide reaffirmed that, “As I have not ceased to say since 29 February 2004, from exile in Central Africa, Jamaica and now South Africa, I will return to Haiti to the field I know best and love: education. We can only agree with the words of the great Nelson Mandela, that indeed education is a powerful weapon for changing the world.” UniFA’s graduation is a significant step towards transforming these words into reality. It is a remarkable accomplishment to have been realized in seven years.

While UniFA flourishes, elsewhere in Haiti education is under attack. Successive neo-colonial governments imposed by the United States by means of phony elections have been plagued by widespread corruption, leaving Haiti’s public sector on the brink of paralysis. According to Dr. Aristide, “Like metastatic cancer, institutionalized corruption devours our social fabric, the future of our children and Haitian youth. The exodus of our young people stems from this cancer.” Nearly 1% of Haiti’s population left the country last year headed for Chile, a mass exodus driven by young people, and especially the rural poor. Many young people who want to attend college leave the country. There are now 54,000 Haitian students attending universities in the Dominican Republic.

Haiti’s former President Michel Martelly, who rose to power with U.S. support, made an empty promise guaranteeing free education funded by a tax on telephone calls and money transfers. Instead, many teachers haven’t been paid in as many as two years. Where is that money? Teacher strikes are met with growing repression and students from college age to grade school join striking teachers to demand the government pay teachers’ salaries. Everyone wonders what happened to the missing $3.8 billion from Venezuela’s Petrocaribe program. Under Petrocaribe, Haiti was supplied with oil at a favorable price with flexible credit. The benefit to Haiti, estimated at approximately $3.8 billion, was intended to combat poverty. All reports indicate that the funds were stolen and misappropriated by the past two governments.

The State University of Haiti closed the schools of Humanities, Law and Ethnic Studies due to ongoing strikes and protests. Last fall, police attacked school children with tear gas in Les Cayes as they supported their teachers’ strike. In the north, hundreds of school children marched to demand, “We don’t want an army; we want education” last November. The students were saying no to the government’s plan to restore the dreaded Haitian military, disbanded by Aristide, which formerly consumed 40% of the state budget. They demanded that the money instead be used to pay teachers their long overdue salaries.

UniFA speaks to the urgent need for democratic progress that has been denied Haiti during fourteen years of U.S./UN military occupation. Failed government promises contrast with the solid achievements of this people’s university, highlighting its importance as a living example of democracy in practice. “I like to tell visitors that they are standing on sacred ground” says Mildred Aristide. She continues, “This is not hyperbole. The stakes and the country’s needs are too high. UniFA is a national project that is slowly revealing itself to be a national institution in the service of the country.”