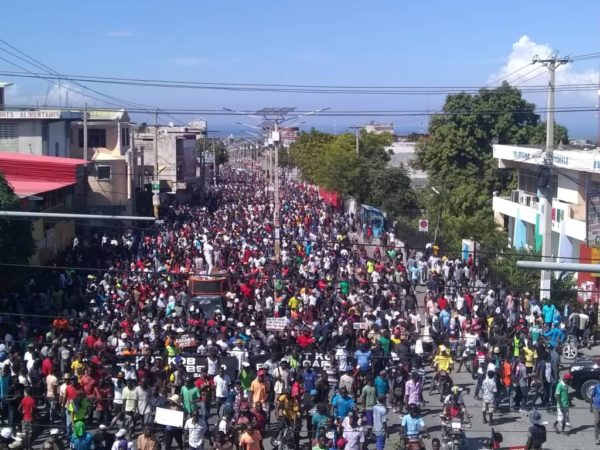 Haiti Action Committee stands in solidarity with the determined resistance to police terror and white supremacy being led by Black people in the United States. We join with so many others to honor the memory of George Floyd, Breonna Taylor, Ahmaud Arbery, and the countless other Black people who have been murdered by police in this country and in Haiti, where it is often the case that the murderous police were trained by US and Canadian agents.

There is a deep history of solidarity between the people of Haiti and Black people in the US. In 1804, Haitians waged a successful revolution against one of the most powerful European empires of the time, emancipating themselves from slavery and colonialism, becoming the world’s first Black republic and the first nation to permanently ban slavery. It can be said that the Haitian Revolution was the most radical assertion of the right to have rights in human history. Fueling hope, resistance and rebellion among enslaved people throughout the Caribbean and the United States, the newly independent Haitian government offered asylum and citizenship to any African who escaped slavery. The independent Haitian government invited people of African and Indigenous origins who were fleeing oppression to come and live in Haiti. Freedom fighters such as Simon Bolivar and liberation movements throughout the Americas were given material support by the Haitian government on the condition that they abolish slavery if they came to power. Haiti stands at the very center of the world struggle to end slavery.

Haiti’s freedom posed a great threat to the system of slavery in the US and the Americas. The white supremacist leaders of the United States attempted to strangle the new nation at its birth by instituting a worldwide boycott against Haiti.  France took similar action, forcing Haiti to pay reparations to French slave owners for the property they lost when slavery ended. This “property” was the human beings who had been enslaved. The debt was not paid off until the 1940s, by which time banks in the United States had taken over the collection process.  Over time Haiti paid France $21.7 billion, an extortion that has been aptly called the greatest heist in history.

In the 20th century Haiti became a virtual colony of the United States, beginning in 1915, when the U.S. marines were sent by president Woodrow Wilson to occupy the country. More than 20,000 people were killed by the marines. During 19 years of occupation Haitians put up a fierce and protracted resistance, and Black activists in the United States were in the forefront of solidarity with the Haitian struggle. The NAACP denounced the invasion, as did the Garvey Movement.  NAACP leader James Weldon Johnson detailed the crimes committed by US occupying forces in ​“The Truth About Haiti: An NAACP Report” (1920) published in The Crisis. The marines finally left Haiti in 1934, leaving in their place the notorious Haitian Armed Forces to violently protect foreign corporations and the Haitian elite by smashing all opposition.

From the 1950s through the 1980s, the US government supported the brutal dictatorships of “Papa Doc” and “Baby Doc” Duvalier, who tortured and killed thousands of Haitians. The popular mass movement that came to be known as Lavalas (The “flash flood” of the people), succeeded in toppling the Duvalier dictatorship and electing Jean-Bertrand Aristide as President of Haiti. Twice, the United States supported coups to overthrow the elected government, in 1991 and 2004. Ever since this last coup, Haiti has been occupied by the United Nations, and the people of Haiti have been engaged in a fierce struggle against a series of puppet dictatorships installed by the US.

Today, the people of Haiti are facing down another US-backed dictatorship — this time headed by Jovenel Moise, installed in 2016 through a series of fraudulent elections based on massive voter suppression. The militarized police of the Moise regime– trained by US police and financed by the US government, including the notorious NYPD– have been killing Haitian grassroots leaders and working with paramilitary death squads to carry out horrific massacres in poor neighborhoods such as Lasalin in  an attempt to destroy the pro-democracy Lavalas movement. These massacres are underwritten by US tax dollars. Just recently, on July 12th, there was another paramilitary assault against the unarmed people of the popular, impoverished community of Site Soley; among the victims was a  baby who was shot in the head. The mother, who has denounced the killers, is now in hiding. The assault was reportedly led by a co-spokesperson of G-9 paramilitary formation also headed by ex-police officer Jimmy Cherizier, aka “Barbecue,”one of the main perpetrators of the Lasalin massacre. G-9 represents the restoration of the death squad “Tonton Macoute” system of the Duvalier period, a development supported by the ruling Moise regime and the US government.

A recent solidarity statement from peasant organizations in Haiti read, in part:

“Today, we follow the history of our ancestors as we stand in solidarity with the people of the US, particularly the Black community that is subjected to racist attacks and oppression. Hand in hand, let us struggle together to eradicate racism and injustice.”

From Minneapolis to the Bay Area to Haiti, the fight against empire and white supremacy is worldwide.  Our solidarity needs to be worldwide as well.

1. Condemn the extrajudicial killings and massacres being perpetrated by the US-trained Haitian police;

2. Demand that the US government stop funding and training the Haitian police;

3. Demand that the Trump Administration stop supporting the dictatorship of Jovenel Moise.

4. Support the Haitian people’s struggle for liberation from US/ UN occupation and self-determination.

For more information, go to ​ www.haitisolidarity.net​ or ​ Haiti Action on Facebook.
To support local grassroots initiatives in Haiti, go to http://www.haitiemergencyrelief.org/