Haiti Action Committee is honored to publish and circulate this statement from Fanmi Lavalas Political Organization. It was released on the 31st anniversary of the 1991 coup d’etat that overthrew Haiti’s first democratically elected president, Jean-Bertrand Aristide, and led to a reign of terror throughout the country. Today, the Haitian people are still resisting the same forces that organized that coup. We hope you will read the statement and circulate it widely. 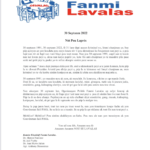 September 30th, 1991 – September 30th, 2022: Thirty-one years since the criminal assassins, the enemies of change, organized a coup d’etat against the Haitian people. This was an attempt to destroy their dream for democracy to flourish in the country with peace of mind and peace in the stomach for everyone. On this day of September 30th, 1991, much blood was shed all over the country, especially in popular (working-class) neighborhoods where the anti-change forces massacred more than 5,000 people who had refused to accept this crushing system of exploitation.

Only seven months after the first free, fair and democratic election the country had ever known, when the people had chosen President Aristide to lead the country, the population was beginning to see the light of change. However, the criminals wanted to keep in place the system of corruption, the system that is established on the exclusion of the majority. September 30th, 1991, they massacred us with firearms, with machetes. To this day, the victims are demanding justice. Since that time, it has been one coup d’etat after another, which has brought about the high cost of living, misery and hunger. Added on to this today are insecurity, gangs and kidnappings– all on top of the high cost of gasoline that threaten to bury us alive.

On the occasion of September 30th, Fanmi Lavalas Political Organization salutes the courage and determination of the Haitian people who are taking a strong stand all over the country to say that the system has come to its end. The people are saying that things must change. The population is rising against insecurity, gangs, massacres, kidnappings, corruption, high cost of living, and the price of gasoline that keeps rising on the backs of the population.

The struggle will never be over until we have blazed the trail with a transition that is a definitive break with this system, by establishing a Government for Public Safety (Sali Piblik). This is what this crisis has made necessary. This is what the population is demanding with determination everywhere in the country.

Mobilize! Mobilize! To bring the system of exclusion to an end. To move forward with a transition and a Government for Public Safety.

Alone we are weak, Together we are strong. All Together WE ARE LAVALAS 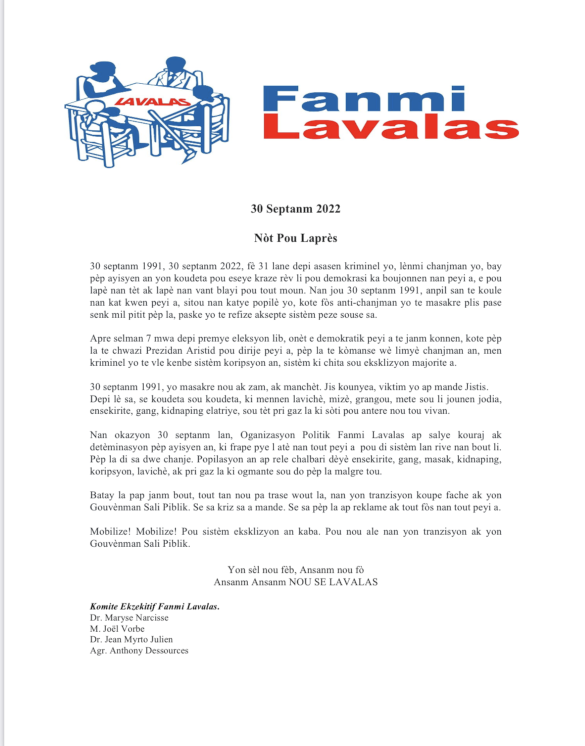