Resisting the Lynching of Haitian Liberty

by Malaika H Kambon This article first appeared in the San Francisco Bayview Newspaper on December 28, 2016.

In spite of all of the horrible things they continue to experience, the Afrikan people of Haiti keep fighting to be free.  Haitian resistance to entrenched US interference has not ceased for over 200 years. The latest attempt to kill Haiti’s freedom by aborting her dreams of democracy via the electoral process was designed to prevent landslide victories for the popular Fanmi Lavalas party. 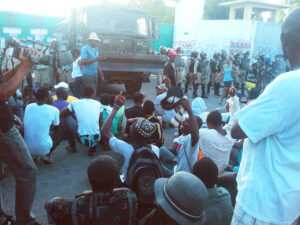 It should be obvious by now that the US/UN, EU, OAS, and various hired paramilitary police have engineered a second fraudulent election in as many years in Haiti.

This latest attempt to kill Haiti’s freedom by aborting her dreams of democracy via the electoral process was designed to prevent landslide victories by Fanmi Lavalas, reminiscent of the presidential victories of Jean Bertrand Aristide. The US and UN do not want to see this.

But people have turned out in force, as protests continue against the blatant sabotage of the November 20, 2016 elections, where Dr. Maryse Narcisse and Fanmi Lavalas again sought to reclaim Haiti’s freedom, only to be met – again – by a US elite intent upon electoral sabotage.

But the fraudulent elections have ignited the country. Daily protests have been held for over a month. For the 35th consecutive day, tens of thousands are in the streets, who see in the candidacy of Dr. Narcisse the fruition of their dreams: freedom, dignity and sovereignty via a political party of the people that knows what it wants to achieve. 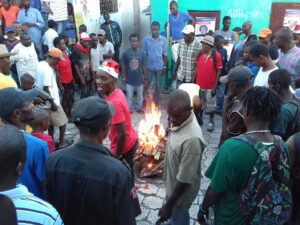 The international press is busily trying to shore up the fraudulent “win” of PHTK (or bald head party) candidate Jovenel Moise. But even in an electoral process that was blatantly manipulated, Moise, “the banana man,” controls nothing in Haiti but his mouth, and that not very well.

And the US government, reminiscent of the cryptic simplicity of Langston Hughes’ poem, “Christ in Alabama,” taunts and tries to snatch Haitian freedom with its entrenched racism.

But Haiti is rising up, and she is fighting back! With the swiftness of a Muhammad Ali strike, Haiti reminds us that we have not ever been n****rs, and that we always define our tree of liberty, and our “place” as being free.

Haitian grassroots people are battling the attempted electoral coup d’etat, and are now into thirty-five consecutive days of peaceful yet forceful demonstrations against the fraud. This has got the resident oligarchies so worried that they have escalated their military and political attacks.

People’s journalists on the job bring the latest news and analysis, recording the truth of events in Haiti. – Photo: Haiti Information Project

Corrupt judges and the PHTK party of Michel Martelly are trying to force international observers and parties contesting the fraudulent November 20 elections to quit the fraud probe. Attacks by militarized police against peaceful demonstrators are growing in number and strength. The entire electoral process is broken, worse than in the US.

On December 24, 2016 at about 2:00 pm Haitian time (5 pm PST) in an escalating show of force, militarized police armed to the teeth shot indiscriminately into a crowd of thousands. Many demonstrators were wounded on Martin Luther King Avenue, in the city of Port au Prince, in Haiti.

Members of Fanmi Lavalas were especially targeted. A sitting member of parliament had his car shot up by police. According to witnesses, a policeman took his automatic weapon and smashed out the back window of the car owned by a Fanmi Lavalas candidate for Senate. A journalist from Radio Timoun, the people’s radio station, was also injured by police gunfire and 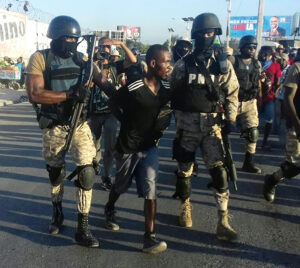 Police repression increases: A protestor is arrested by masked police during a pro-democracy march in Port au Prince. Protestors are demanding a full probe of the fraudulent Nov. 20 election. – Photo: Haiti Information Project

was taken to hospital.  The people announced that demonstrations would continue on December 25, 2016, day 34. They will not stop.

A critical question people should be asking themselves is why do a bunch of fascist, billionaire whites; their international quislings; and the internal puppet leadership of Haiti; want so badly to maintain an apartheid regime, and the occupation and ownership of a sovereign Afrikan country they describe as “the poorest country in the Western Hemisphere?”

Recall that Haiti was forced to pay the blood sucking World Bank and its IMF vampire siblings more than a million dollars per week to satisfy debts incurred by the 29-year Papa Doc and Baby Doc Duvalier family regimes, and other Duvalierist tyrants who succeeded them. The most recent example of these is the highway robbery of the treasury by Hillary Clinton’s puppet, Michel Martelly.

Round and round and round they go, with the World Bank lying and saying it is eradicating poverty, while Haitians eat mud cookies in order to repay a debt caused by white theft and to be considered deserving of “help” from blood sucking multilateral financial institutions.

Such thieves include the Clinton Foundation, which claimed magnanimity in their dealings with Haiti, as billions of dollars of earthquake relief money under their control remains unaccounted for.

The people of Haiti are left even more impoverished. 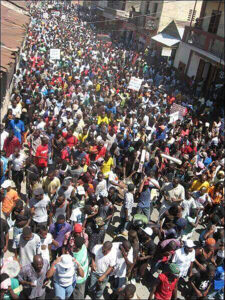 Imagine the uproar if thousands of people in the U.S. were to pack the streets protesting our fraudulent election, yet the crowds of angry Haitians growing every day for 35 days so far get very little mainstream media attention. – Photo: Haiti Information Project

This continual interference in Haiti’s democratic process keeps happening because:

(1) Haiti overthrew chattel enslavement of Afrikan people over 200 years ago by slapping down the combined military might of France, England, and Spain; thus establishing its independence, and turning the myth of white supremacy on its head. “We are the first Black independent country in the world,” asserts its first democratically elected president, Jean Bertrand Aristide.
(2) Even though the same “civilized” Euro-American and Canadian regimes instigated two coups d’etat against the government of Jean Bertrand Aristide; the people haven’t ever stopped resisting tyranny;
(3) Haitian resistance keeps getting stronger, despite US-UN occupation of the country. In collusion with the US government, in 2004 the United Nations brought its un-peacekeeping, cholera spreading, brutal force of 10,000 MINUSTAH troops into Haiti. Along with the reconstituted Haitian army headed by drug runners wanted by the DEA, these combined forces exist to “keep the natives in their place.” This is with the full support of the Organization of American States (OAS) and the European Union (EU).
(4) President Jean Bertrand Aristide fought and continues to fight for Haitian dignity, sovereignty, and independence. When he was in office, he refused to be a sellout president and kept all of the Haitian assets for the Haitian people. In 2003, he demanded that over $22 billion dollars in money extorted from Haiti by 19th century France be restored. Haiti was originally forced to pay this money starting in 1826, to former slave owning French plantation owners.
(5) Drs. Jean-Bertrand Aristide and Maryse Narcisse both defy the evil of entrenched tyranny. Dr. Maryse Narcisse, the 2016 Fanmi Lavalas presidential candidate, is in the streets daily with the people fighting for Haiti’s independence.
(6) President Aristide fought for fair trade for Haiti, in defiance of the Clinton regime policies that collapsed Haiti’s economy.
(7) Haiti’s geographic location boasts huge oil, gold, and other reserves of wealth. She is also strategically located in relationship to Cuba.
(8) President Aristide attacked and threatened the hegemony and corruption of Haiti’s 1% ruling elite by enforcing labor and taxation legislation laws.
The US attitude toward Haiti has always been one of keeping Afrikans “in their place,” as described by white supremacy. 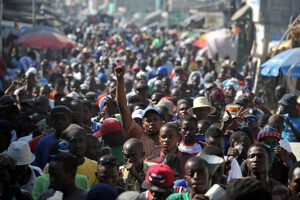 US 19th century government didn’t want a free Afrikan state dismantling its brutal slave economy. So enslaver US president Thomas Jefferson gave Napoleon $40,000.00 to re-enslave Haiti. He also put the word out that an Afrikan person was only worth three fifths of a white person. Napoleon got his butt kicked; Jefferson lost a lot of money but acquired the Louisiana Purchase for a song, and Haiti was free.

Fast-forward to 1915 and U.S. president Woodrow Wilson of Birth of a Nation-reinstitute-the-KKK-filmmaking fame. His Secretary of State, William Byron Jennings “disapproved” of “Niggers, speaking French!” in Haiti. Wilson sent in the Marines to occupy and rob Haiti from 1915-1934. 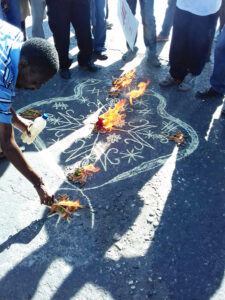 Haitians kept deciding that their “place” was to be free, so the IRI, Colin Powell – another lying Secretary of State, the CIA, and USAID kidnapped President Aristide and his family by transporting them as “cargo” to the Central Afrikan Republic, in a US plane designed for the program of “extraordinary rendition.”

Well, that didn’t work either because Congresswoman Maxine Waters, Trans-Africa founder Randall Robinson and others snatched them back from the brink of captivity and they went into exile, first in Jamaica then in South Africa until the power of the Haitian people brought them back home to Haiti. 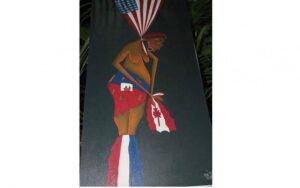 A Haitian artist depicts the U.S. murdering Haiti’s democracy. This is a photo of the painting, the only image available.

In spite of all of these horrible things and more, the Afrikan people of Haiti keep fighting to be free.  Haitian resistance to entrenched US interference in her government has not ceased for over 200 years. It will not stop. It is about to be 2017, right now.

The Haitian Revolution, from 1791-1804…It is happening again. The people of Haiti will be free.

Malaika H Kambon is a freelance, multi-award winning photojournalist and owner of People’s Eye Photography. She is also an Amateur Athletic Union (AAU) state and national champion in Tae Kwon Do from 2007-2012. She can be reached at malaikakambon@gmail.com.