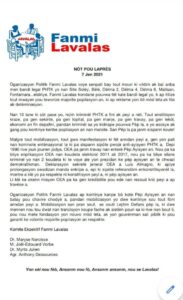 Fanmi Lavalas Political Organization sends our deepest sympathy to all the victims of shootings by the legal bandits of the PHTK government in…Site Soleil, Bele, Delma 2, Delma 4, Delma 6, Matisan, Fontamara… and other communities. Fanmi Lavalas condemns the PHTK death squad government that has been using all means to terrorize a population that is steadfast and determined in its demand for a different form of government.

In the past ten years, the PHTK regime has completely devastated the country. The country’s institutions are non-functional: there is no public safety, no hospital, no food, no employment, no school – and the economy has collapsed as these criminals have kidnapped the people’s government while working in association with gangs to keep the population in miserable conditions. The people’s blood continues to be spilled!

Despite large mobilizations and massive demonstrations that have taken place in the country, there is still a segment of the international community that has not stopped supporting the anti-Haitian project of the PHTK. From 1990 to the present, the OAS (Organization of American States) has never worked in the interest of the Haitian people. We cannot forget the involvement of the OAS in the electoral coups d’etat of 2011 and 2017. We cannot forget their criminal silence as two coups d’etat overthrew a president who the people had democratically elected. The declaration of the Secretary-General of the OAS Luis Almagro, supporting the extension of the so-called mandate of the indicted one* and backing the unconstitutional referendum, clearly shows that the OAS does not respect the constitution of the country nor the Haitian people.

It is clear that no OAS mission can have any credibility in resolving the crisis that is presently gripping the country.

Fanmi Lavalas Political Organization will continue to stand with the Haitian people in the struggle to overturn the cauldron. Mobilizations must continue in all forms throughout the country. Continuous mobilization is the people’s method of Self-Defense that will lead to a resolute transition to break with this rotten system that is at its end. We can then put in place the foundations of a new model of the state, with a government of “sali piblik” (public safety) to guarantee that the will of the people is respected.

*The “indicted one” refers to the illegitimate regime of Haitian ruler, Jovenel Moise.