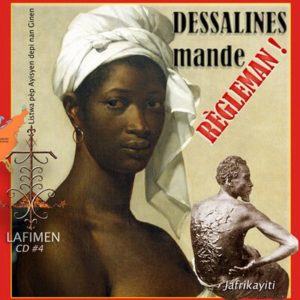 In 1997, at the height of his political career as Haitian Minister of Culture welcoming hip-hop megastars the Fugees, I interviewed Raoul Peck in Port-au-Prince. The subject of our brief exchange was the co-production of a major motion picture about the Haitian revolution. I asked Minister Peck for his thoughts on the idea floating around at the time that, following the model of Spike Lee’s « Malcom X », a major effort be undertaken to raise funds to produce a film on the Haitian Revolution. I took the license of suggesting that the venture be a «Peck-Lee joint ». Although he duly acknowledged the merit of the proposal, Minister Peck was quick to dismiss it as a “good idea but…not likely to happen anytime soon.” “We are not there yet” he also offered.

This was my first encounter with Raoul Peck, the politician. Over the next few years, I would come across many other statements from politician Raoul Peck whom I consider to be a radically different character than the respected film-maker whose work I so appreciate.

In as much as his Director’s skills can be awe inspiring in Man by the Shore or Lumumba, Peck’s tenure as Minister of Culture as well as the role he subsequently adopted as merciless critic of his former political colleagues have been huge disappointments; starting with his book “Monsieur le Ministre”, in which Peck appears to shamelessly blame everyone but himself for the dismal failure of the government he served in 1997 and up to the first half of 1998. I found Peck’s endless rambling in that book especially disappointing since I can remember how saddened I was when Wyclef Jean, back in 1997, let wild rumours run unchecked that Minister Peck himself had somehow participated in embezzlement of the Fugees’ concert profits. Truth be told, I suspect that such profits in all likelihood never existed.

Quote:
“Raoul Peck, the Minister of Culture, announced that the vast outdoor concert had been a break-even venture; actually, on second thought, a money-loser, a bit of accounting that seems as ridiculous to the Fugees as it does to the Haitian people, some of whom are calling for Peck’s immediate removal.”

Sadly, Peck was to later emulate the same irresponsible behaviour as Wyclef and, by his own erratic accusations against his former political associates, prove that Haiti’s spoiled “elite” does indeed have an over-appetite for public smearing of their compatriots. A habit that has certainly contributed to the dire situation the nation finds itself in this our bicentennial year.

Peck’s latest attacks have targeted African and Afro-Caribbean vanguard forces which, over the past few years, courageously stood up to the powers in Europe and North-America that have masterminded the bicentennial coup-kidnapping against Haiti. In November 2003, Peck published a text in which he blasted “the Congressional Black Caucus, TransAfrica Forum and other groups” for their continued support of Haiti’s constitutional government led by President Jean-Bertrand Aristide. Peck’s latest diatribe, dated December 16, 2004, went straight after South-African President Thabo MBeki.

In essence Raoul Peck argues that President Aristide was “forced out as a result of his errors of judgment in making decisions as a chief of state”. To support this argument, Peck feels not the least bit compelled to provide substantial evidence of Aristide’ supposedly unforgivable sins. Instead, he graces us with hyperbolae like “his closest collaborators have been indicted on drug trafficking charges in Florida”. As if Peck ignores that drug trafficking has been and remains an integral part of the CIA’s operations throughout Latin America. As if Peck isn’t aware that, in Haiti, the U.S repeatedly uses and protects convicted murderers like Jean Pierre Baptiste (Tatoune), Jodel Chamblain, drug dealers like Prosper Avril and Guy Phillipe to conduct coup after coup…while claiming to be waging a “war on drugs”? How many times has this so-called ‘war on drugs’ been used around the world to topple or shape down regimes considered to have become too hostile or not sufficiently compliant to Uncle Sam’s desiderata?

It is indeed disturbing to note Peck’s nonchalant “he had it coming” response to the fact that, in 2004, the duly-elected Black president of his native country had been, in the dead of night, surrounded by white U.S. Marines and other co-conspiring foreign forces, shoved into an unmarked plane and flown “back to Africa” – The abducted president and his spouse were kept without knowledge of their own whereabouts for over 20 hours, until they were to land in a hostile Central African Republic (CAR). Please see Democracy Now’s coverage of this amazing story at www.democracynow.org.

Raoul Peck claiming that President Aristide is somehow the culprit of his own forced removal from Haiti is not unlike throwing blame at a rape victim for having probably enticed her assailant with skirts worn too high above her knee. Of course, it is a ridiculous proposition Mr. Peck ! Especially,
in view of the fact that the historical record clearly shows that President Aristide’s second overthrow by a Bush administration was planned well in advance of his return to power in 2000. In fact, a full five days before President Aristide even delivered his swearing-in speech, the Washington Post published these prophetic lines: « The most determined of these men, with a promise of anonymity, freely express their desire to see the U.S. military intervene once again, this time to get rid of Aristide and rebuild the disbanded Haitian army. “That would be the cleanest solution,” said one opposition party leader. Failing that, they say, the CIA should train and equip Haitian officers exiled in the neighboring Dominican Republic so they could stage a comeback themselves.» Haiti Torn by Hope and Hatred As Aristide Returns to Power by Edward Cody (Washington Post, February 2, 2001)

Peck claims in his “Aristide is no Mandela” that it is his “hope with this article to help bring the truth about Aristide to South Africans”. Yet, just a few lines after presenting himself as the ultimate revealer of “truth”, quite disingenuously, Peck speaks of President Aristide’s 13 years in power. Unfortunately, this type of blatant exaggeration has become the hallmark of Anti-Aristidism masquerading as “ideologically-based opposition” in Haiti. This blatant lack of intellectual honesty has caused Peck’s camp to lose much of the respect they once enjoyed in the eyes of average Haitians. Thus, it is not surprising if, a full 10 months after the coup, Peck’s own OPL party remains a marginal element on the Haitian political landscape. Obviously, and sadly so, whatever support Aristide’s Lavalas party did lose after the coup was not taken up by his political opponents who only managed to turn many people completely off the whole electoral democracy path. Today, all the U.S. or French embassy- dependent parties that actively or passively collaborated with the Franco-American cabal that conducted the Feb 29th coup remain patently unpopular.

Despite Raoul Peck’s creative math, the people of Haiti know and the historical record shows that President Aristide spent – not 13 years – but the following periods of time in power: from Feb 7, 1991 to September 29th 1991 – until overthrown by a bloody CIA masterminded coup d’état, after only 7 months in office, while former CIA Director George Bush the elder was in the U.S. White House. Then President Aristide, returned to power by the Clinton administration, served the last 16 months of his term (October 15, 1994 to February 7, 1996). That’s a total of 23 months served from a 5 year presidential mandate. Barred from seeking a consecutive term in office, President Aristide stood out the 1995 elections.His second mandate, obtained by the ballot, not by coup, began February 7, 2001. This time around he managed to resist for 3 years before being overthrown again – this time by George Bush the lesser, with logistical help from France and Canada, on February 29, 2004. Thus, the man spent a total of 5 truncated years in power. Peck’s attempt to count as Aristide’s mandate, President René G. Préval’s term, during which Peck himself served as Minister of Culture is simply ridiculous. Obviously, to arrive at the 13 years he mentions in his text, Peck had to have also added for good measure the 3 years President Aristide spent in exile as a result of Bush the Elder’s 1991 coup.

No wonder Raoul Peck is outraged that “we have been hearing loud cries of outrage from some of the black “elite” in the United States, South Africa and the Caribbean about a “kidnapping”. “Let’s be serious!” admonishes our self-described revealer of truth to the people of South-Africa. But, on this December 16, 2004, 14th anniversary of the first democratic elections in Haiti, Peck’s call sounds tragically hollow. If it ever manages to shake the resolve of some weak puppet leader of one of the client states that subscribe to neo-colonial clubs such as the “franco-phony”, it will certainly not deviate seasoned Statesmen and Stateswomen like brother Thabo Mbeki, sisters Congresswomen Maxine Waters, Barbara Lee or Prime Minister Ralph Gonsalves. Rather than trying to break the historically-rooted pan-African solidarity with Haiti’s genuine democratic camp, Haiti’s out of touch petty bourgeoisie should take a cue from the heroism and steadfastness of one Randall Robinson, who helped smuggle that cell phone to President Aristide while he was still being held by his Franco-American kidnappers in the CAR, thus forging a first opening for the truth about the tragic events of 2004 to flow to the world.

Brother Raoul Peck’s Aristide-Mandela comparison may be ill-inspired but it serves well to remind us that elder “Madiba” was himself, still not so long ago, officially considered a “terrorist” by the very hypocrites who today are falling all over themselves for an opportunity to be photographed with him. If a young but perhaps too tragically eurocentric Raoul Peck sadly allows himself to be perceived as a supporter of the 2004 Franco-American coup, our aged African elder, the beloved Madiba, had the following words of wisdom to share with us, not so long ago:

“We now live in a world where powerful countries – all of them so-called democracies – manipulate multilateral bodies to the great disadvantage and suffering of the poorer developing nations.” And, specifically about President Mbeki’s warm welcome offered to President Aristide, Madiba said: “I should have come to see you but I don’t want to appear to be competing with President Mbeki. He’s doing very well.”

So, instead of trying to sow division within the African family, brother Raoul Peck, you should take a final cue from brother Danny Glover’s December 5, 2004 declaration where, in sharp contrast to your inappropriate attack against brother Mbeki, Danny declares himself “gratified to see South Africa and President Thabo Mbeki standing steadfast beside the Haitian people”.

Frankly Mr. Peck, we can’t afford to continue playing this fratricidal game while, on the side of the imperialists, they continue to work in complete synergy to crush the few gains Haiti has made on the path of democracy in the last decades. You need not be Spike Lee. No more than President Aristide need to be Mandela. We each have our own path to follow in the struggle dear brother. Nonetheless, if you truly wish to stand for constitutional democracy in Haiti, if you truly wish Haitians to live safe from the murderous CIA-dependant military which President Aristide had the wisdom to disband back in 1995, you must find the courage to admit that the imperialist forces had taken you for a wicked ride. You need to make that full stop and boldly take the required turn to join your brothers and sisters “doing the right thing”.

Please join us as we continue to say no to unelected Uncle Tom puppet dictatorships in Haiti! No to all foreign occupations of Haiti ! No to a return of the CIA’s bloody army in Haiti !Yes to the return of legal and legitimate governance in Haiti, with President Aristide – until his legal mandate expires naturally, without coup d’état or kidnapping.