Stop the Deportations – Stand with Haiti by Leslie Mullin

Last September, scenes from the Del Rio refugee camp in Texas horrified the world as we witnessed mounted US border police terrorizing Haitian refugees, whipping people with their reins to turn them back from the US border. Evoking the brutality of racial slavery, the images unmasked the US government’s racist disregard and contempt for black Haitian lives.

Del Rio has faded from the headlines, and the Biden Administration has only doubled-down on sending Haitian refugees back to a country that its own State Department has designated the highest travel risk. Even before last July’s assassination of the Haitian president, US authorities acknowledged that Haiti was undergoing a “deteriorating political crisis, violence and staggering increase in human rights abuses.”

Last February, at the start of Black History Month, ICE began using what’s known as Title 42 to drastically escalate removals and expulsion of Haitian refugees, resulting in untold human rights violations for Haitian asylum seekers. Title 42 grew out of the Trump White House effort to close off the southern US border. It uses the pandemic as the pretext to stop refugees from entering the US. It has been referred to as “Trump’s Invisible Wall”.

Under Title 42, the US has effectively eliminated the right to asylum in violation of US and international law. Masquerading as public health policy, Title 42 permits refugees to be summarily expelled from the US by any border agent without having access to apply for asylum or other humanitarian relief, immigration courts, or legal counsel. Hundreds of thousands of people are being denied the right to seek protection, not only Haitians, but refugees from around the world.

Since September, over 20,000 Haitians to date have been forcibly returned to Haiti. In one recent month, 49 chartered flights left the US filled with Haitian refugees. Often chained and shackled, without food or water, they are dropped off at the Toussaint Louverture Airport in the Haitian capital, Port-au-Prince, with nothing to their name. Some are women 35 to 36 weeks pregnant.

On another front of global US policing, in collaboration with Caribbean countries like the Dominican  Republic and Bahamas, the US Coast Guard extends its armed patrols far into the Caribbean to hunt down and return Haitians before they ever get near US borders. During one week in late January 2022, the Coast Guard intercepted 88 Haitians near the Bahamas and returned them to Haiti. Another 191 Haitians were intercepted near the southern Bahamas.

We can’t talk about this country’s indefensible treatment of Haitian refugees without addressing the role our government plays in creating the circumstances that drive people to flee. Eighteen years of foreign intervention and occupation  since  the 2004 US-backed coup overthrew President Jean-Bertrand Aristide have brought only widespread misery, insecurity, and violence.

The immediate US/UN occupation response to the 2010 Haiti earthquake that killed over 200,000 people was heightened military presence in and around Haiti because the Obama administration feared an exodus of refugees. A democratic Haitian government would have begun to repair Haiti, restore infrastructure, housing, sanitation, education, health care, food security – all efforts the Aristide government was undertaking before the coup. Instead the US launched the infamous Bush/Obama/Clinton Build Back Better plan – an undisguised global corporate/NGO grab-bag to plunder Haiti’s resources and make a profit.

Since then, the US has steadfastly backed a series of corrupt and brutal regimes in Haiti headed by the PHTK or “Bald Head” party. Government affiliated death squad gangs have paralyzed the country with the worst kidnapping wave in Haitian history. Death squad violence targets grassroots communities for their political resistance. People are literally unable to leave their homes for fear of being kidnapped, raped or murdered. Nowhere is safe. Thousands of people have been, and are, being killed, including many journalists.

We need to unpack the racism of the mainstream media that talks as if these things are endemic to Haiti or to a “failed state” or to African people in general. They repeat one racial trope after another and fail to make the connection between the horrific conditions facing Haitians and the US-orchestrated policies that have created them.

The US border industry maintains secret detention centers across this country which are designed to deny people access to the outside world – to family, attorneys, interpreters and the media. Haitian refugees in US custody are being detained in freezing crowded cells without adequate food or water, without sanitation or basic medical care, and without knowing why or for how long.

Often what many of us know about refugees comes from the images we see of thousands of people massed at the border. We don’t know who each of these people are. But each has a story.

Here is the story of one Haitian man currently in US custody, told to a member of Haiti Action Committee. He and his family owned a plot of land in Haiti where they planned to build a home. Local agents of the PHTK ruling party came to take their land. When the man and his family resisted, the man’s father was shot and killed. Eventually, the son fled to the US. His wife remained in Haiti. The agents returned again to seize the land. When his wife, then six months pregnant, stood up to them, she too was murdered. Now this man, bereft of this family, waits in an ICE facility hoping that the US will recognize his claim to asylum.

After Haiti’s 2010 earthquake, Brazil became a main destination for Haitians leaving their country. Brazil used its position as the lead country in the UN occupation force (MINUSTAH) to recruit Haitians with the promise of work  as Brazil was preparing for the World Cup and Olympics. After years of low-wage labor helping build the infrastructure for these major events, Haitians found themselves disposable and no longer welcome. By the thousands, they left Brazil for Chile, and as conditions became even more deplorable there, to the United States.

Only the most desperate, determined and courageous people would choose to make the arduous 7000 mile journey through Latin America to the United States.  Estimates are that in 2021 over 60% of the people undertaking the treacherous Darien Gap through Central America have been Haitian men and women; some are pregnant, some are single moms, some are children and infants who are facing extreme danger and grueling conditions. They have dealt with extreme heat, exhaustion and hunger – and been victimized by robbery and rape, all in order to reach the U.S.  Del Rio showed us what awaits them if they make it.

It’s important to understand that this is not new. For over half a century, the US has backed brutal Haitian dictators while expelling Haitian refugees back to the dangers they have fled. The first boat carrying Haitians fleeing the Duvalier dictatorship arrived in the US in the 1960s. All were deported. From the 1970s through the 1980s, as Haitians still endured the regimes of Papa Doc and Baby Doc Duvalier, the US continued to expedite the swift removal of Haitian refugees.

After the 1991 military coup that overthrew Haiti’s first democratic government headed by President Aristide, thousands of his supporters were hunted down and killed by the military junta and their death squads. The number of Haitian refugees fleeing repression rose dramatically. The Coast Guard captured and forcibly repatriated many thousands, and imprisoned up to 21,000 Haitians at a time at Guantanamo Bay.

This outrage sparked massive worldwide protest. Within the US, a vibrant movement consisting of the Haitian diaspora, prominent Black activists and artists, college students, churches, human rights, labor and anti-imperialist activists emerged. In 1992, 82 year old dance artist Katherine Dunham undertook a 47 day hunger strike to protest the Bush Administration’s policy of repatriating Haitian refugees. Tennis champion Arthur Ashe was arrested in front of the White House along with other leading Black activists at a protest organized by TransAfrica and the NAACP. Two years later, TransAfrica Forum Director Randall Robinson fasted nearly a month to protest the Clinton Administration’s policy of returning refugees to Haiti without hearings on asylum. 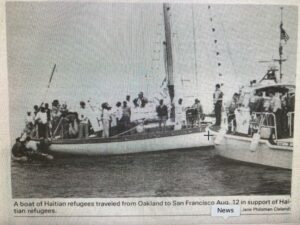 The Haiti Action Committee grew out of this movement. Our first action took place thirty years ago when Haiti Action, Bay Area Peace Navy, ACT-UP, Global Exchange, and others joined together to protest the  unjust and racialized policy of the US towards Haitian refugees. With the enthusiastic participation  of Haitian community members, the Bay Area Peace Navy launched three boats across the San Francisco Bay from Berkeley to San Francisco filled with several dozen Haitian passengers, some who were formerly refugees. Waiting to welcome the Haitians  at the San Francisco pier were 250 demonstrators along with supportive members of the City Board of Supervisors ready to present them with flowers. The District Attorney at the time, Terence Hallinan, was set to give a welcome speech.

The Coast Guard got wind of the action and thought San Francisco was threatened with an influx of Haitian refugees. Carrying out official US policy, a Coast Guard cutter and helicopter intercepted the boats to prevent their landing. Authorities boarded the boats and inspected everyone’s papers. Passersby on the San Francisco wharf began chanting Let Them Land! Let Them Land! The action made headlines and brought the issue right to the shores of the Bay Area. Like today, activism and solidarity makes a difference.

The fight for refugee rights has never been more urgent – not only for Haitians, but for displaced peoples around the world from Honduras, Guatemala and El Salvador, to Syria and Yemen, Iraq, Sudan and more. Consistent advocacy work for Haitian refugees is underway among Haitian and Black activists, community organizations, churches, refugee rights and grassroots organizations.

We embrace this work and join in the demand to stop the deportations. No one is illegal. We stand with Haitians and all other refugees. We hold the US government accountable for its criminal inhumane violations of refugee rights and we demand an end to US intervention in Haiti.

Stand with Haiti! Stop the Deportations! US, Stop Funding Terror in Haiti!