We Will Not Obey – Nou Pap Obeyi! 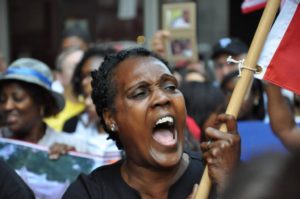 Reflecting on the voting rights struggle led by Dr. Martin Luther King Jr, and so many other courageous fighters for justice fifty years go in the US; on the one person, one vote struggle led by Mandela’s comrades in South Africa; reflecting on struggles everywhere, we came to the conclusion that a people can’t be sovereign if they don’t have the right to vote. No people can retain their dignity if their vote does not count. As clearly stated by President Aristide, “If we don’t protect our dignity, our dignity will escape us.” That is why we struggle and ask that people the world over with a history of struggle stand in solidarity with  us.

Six years after the earthquake that jolted the country, causing the death of hundreds of thousands of Haitian, we Haitian organizations, in the context of reflection, take our hats off and humbly say to the people all over the planet who opened their hearts to us, “we have not forgotten your acts of solidarity.” The sharing impulse manifested by people the world over, should have helped the Haitian people to rebuild their environment, rebuild their lives. Pity! To this day, the people’s lot has not changed. Adding insult to injury, shameless characters, local slave owners, empowered by various international organizations, hijacked the reconstruction funds.

Right after the earthquake, the internationals took advantage of our momentary state of helplessness to occupy the political space.Today,the Haitian people are engaged in an all out struggle to reclaim that space and to exercise their right to vote. The very ones who hijacked the reconstruction money want to prevent the people from choosing their government, in a wide scale conspiracy to continue the looting of the country’s resources. Subsequent to  many schemes designed to remove the people from the political equation, local colonialists joined forces with international colonialists to force the people to accept choices against their best interests. Illegitimate officials implemented urban removal plans and land grabs, assaulting both the middle-class as well as the poorer classes, putting the country on the brink of collapse. The people’s resistance slowed down the “terror apparatus,” preventing it from completing this program. Now they want to put more false officials at the helm of the government to continue their assault.

The blatant violence perpetrated in Ile-a-Vache, the hideous massacres perpetrated on the people of Arcahaie, the continuous massacre of the people of Cité Soleil because they manifest a will to vote, various acts of aggression perpetrated throughout the country, in the context of land-grab or voter suppression, convince the Haitian people that they are in a fight for their very existence. We say NO, WE WILL NOT OBEY ILLEGITIMATE OFFICIALS. Self-defense is a legitimate universal law. Civil disobedience is an accepted universal right when a people confronts an illegal regime. The right to elect a government is universally accepted as a way for people to protect their existence.

Our experience of the six years since the earthquake is no different than the experience of other small countries with natural and human resources. The internationals loot, have an orgy, while the international media turns a blind eye to lies spread by “their” ambassadors in their country’s name. The Haitian army, now being rebuilt to repress the people, is a gift to the Haitian people by the Organization of American States (OAS). The Cholera epidemic and the corrupt Haitian police were United Nations (UN) gifts to the Haitian people. The Media is mute as the country nears total collapse. We say NOU PAP OBEYI – NO WE WILL NOT OBEY. We will not dig our own graves. We’d rather tell the truth and expose the conspiracy.