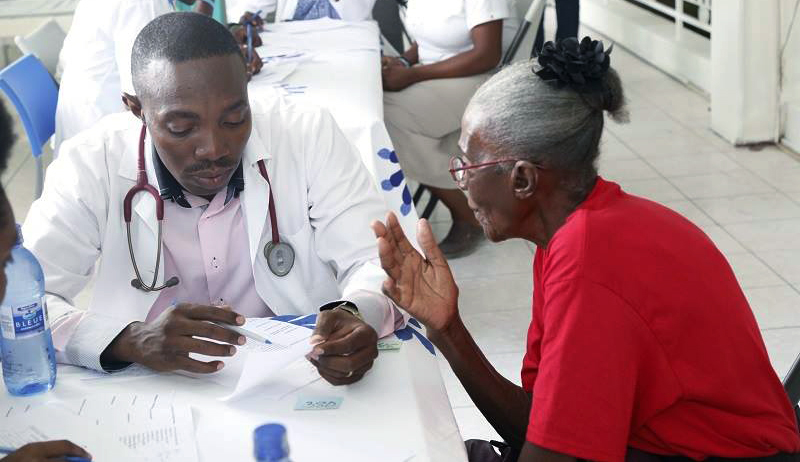 Home / In the News / Resisting COVID-19 in Haiti

On March 19, 2020, shortly after international institutions made known that millions of dollars would be available to impoverished countries with COVID-19 cases, Haitian authorities finally addressed the coronavirus pandemic by declaring that there were two cases in the country. People in Haiti were outraged by the silence and inaction of the authorities as news spread of preventative measures being implemented in the neighboring Dominican Republic and other countries. Since the initial declaration, the number of cases in Haiti has remained in doubt, with grassroots health workers and activists distrusting any government figures and demanding action to prevent a catastrophic spike in infections and deaths. 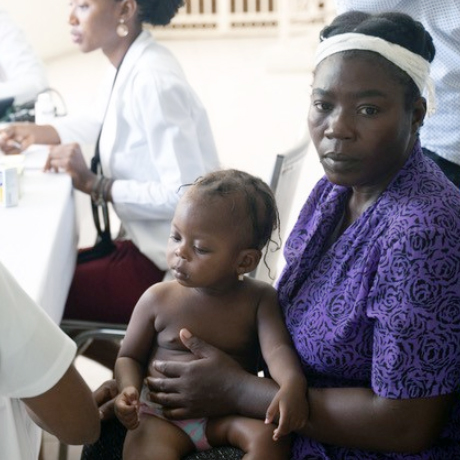 The government of the US-imposed Haitian president Jovenel Moise, together with the US-led Core Group consortium of foreign governments ruling UN-occupied Haiti, have been oblivious to the need to prepare the nation for the COVID-19 calamity. In a video message widely circulated on social media and broadcast on Radio Tele Timoun (Youth RadioTV), a Haitian medical student trained in Cuba charged that the necessary mobilization of hundreds of young trained health care professionals is not taking place. On social media, radio and television, medical professionals and the broader public have denounced the lack of policy, transparency and systematic training that dealing with this major crisis requires. Not respecting their own physical distance rule, the authorities have suddenly been mobilizing hundreds to attend closely packed meetings to renew controversial voter ID cards. Photos and videos showing dirty rooms, filthy beds and rat-infested trash in the two largest public hospitals in Port-au-Prince have added to people’s outrage. Summing up the sentiments of the general public, a woman trader in an open-air market commented that, “The authorities care only about lining their pockets…”, “They will not do anything for us; the choice I have is to die of the corona virus or starvation; dying by the corona virus will take me out of this misery…”

A raging discontent with the deepening misery is at the core of the nation-wide grassroots movement. On-going peaceful protests against corruption have been met with brutal repression, long detentions in filthy overcrowded prisons and killings by a deadly security apparatus. These forces, consisting of the UN-trained police, the restored Haitian military and paramilitary groups, have also been responsible for massacres in the impoverished neighborhoods of Granravin, Site Vensan and Lasalin among others.

As Haiti comes to grips with the pandemic, the nation is confronted with other results of the “regime change” that occurred on February 29, 2004. This US-led coup d’etat and subsequent 16-year UN occupation reversed the progressive agenda implemented by the democratically elected government of President Jean-Bertrand Aristide. Resisting the imposition of neo-liberal policies known by Haitians as “Plan Lanmo” or “Death Plan” the program of President Aristide’s Fanmi Lavalas government, called “Investir dans l’Humain (Investing in People),” focused on building schools, a medical university, hospitals and the national laboratory as part of a much-needed infrastructure to provide quality education and health care. This program to rebuild the country after the 37-year corrupt dictatorship of the Duvaliers and later military rule was repeatedly hampered by US actions. An economic embargo blocked the disbursement of approved low-interest loans for healthcare, education, transportation and potable water projects as two US-backed coups d’etat killed over 15,000 people. The neo-liberal plan implemented since the 2004 coup has resulted in the percentage of the national budget for education being slashed from about 20% in 2004 to 13.1% and that of health care from 16.6% to 4.4% according to recent data.

The achievements by a “people-first” oriented government during the ten-year democratic interlude of 1994-2004 are etched in the collective memory. To survive the deadly coronavirus pandemic, people in Haiti are relying on their solidarity with one another and organized structures at the grassroots level to share prevention information and resources. Health workers, as individuals or groups, are educating themselves and the public. Early on, as China was battling COVID-19, the faculty and student medical body in institutions such as the University of the Aristide Foundation (UNIFA) began preparing the university and broader community with a steady stream of educational presentations. Radio TeleTimoun has been daily broadcasting much valuable health-related information aimed at reaching the most vulnerable communities in Haiti. As Haitian and occupation authorities are de-funding education and health care, there is an urgent need to support a human needs-oriented educational institution like UNIFA, its life-saving mobile health clinics, and its teaching hospital under construction.

The coronavirus pandemic has shone a spotlight on the deteriorating living conditions in Haiti. The ever-present crisis in the healthcare system is experienced by women laying on the bare floor of non-equipped maternity wards, and by men and children with various ailments unable to get care. According to recent studies, only about 30 percent of the population has direct access to potable water.  In this situation, how are people going to wash their hands frequently? The lack of basic sanitation services, including trash and waste removal in densely populated cities, is exacerbating the crisis. The slashed health care budget has resulted in decreased services and closings of a number of health care centers and hospitals. There are now only around 124 intensive care unit beds and less than 100 ventilators for a population of about 11 million.

Medical professionals are bringing these conditions to light, frequently protesting to demand personal protective gear and basic medical equipment and to address the unsanitary conditions in a number of institutions in the country. Sanitation workers, teachers, students, farmers, market vendors and even members of the police who are facing similar working conditions have protested and gone on strike.

While many healthcare workers go unpaid, public funds continue to be lavishly squandered on bogus multi-million dollar projects and the ostentatious lifestyle of government officials and foreign Core Group consultants. Reports of misappropriation and theft include about $4.2 billion stolen from oil sales as part of the Venezuela PetroCaribe program.

Haitians can see through the lies broadcast by those that rule the country. They know that the vast majority of the money raised around the world after the devastating 2010 earthquake, estimated at $11 billion, never reached them. They know that the United Nations denied its responsibility for the cholera epidemic and, after finally admitting culpability, has refused to pay reparations for the over 15,000 Haitians who have died. They have no faith in a government that has stolen elections and then ramped up repression even as the coronavirus has begun its deadly march.

The struggle against the coronavirus is a world-wide fight. It demands that we stand in solidarity with each other, across all borders. Despite the lack of coverage, the people of Haiti are confronting a dual crisis. Their struggle against a corrupt and repressive system and now COVID-19 demands strong advocacy and support. It is essential that we see their struggle as our own.