On July 28th, marking the 106th anniversary of the US Marine invasion of Haiti, human rights protesters displayed banners across major freeways in the SF Bay Area, including highways 101, 580, and 280. Under the slogan # Stop US Intervention in Haiti, the banners called for an end to US government support for the ruling PHTK dictatorship in Haiti that came to power through the fraudulent election of Michel Martelly in 2010. The PHTK dictatorship maintained its grip on power through the fraudulent election of Jovenel Moise in 2016, and remains in power today despite the recent assassination of Moise. Both elections were held under UN occupation and sponsored by the US government. 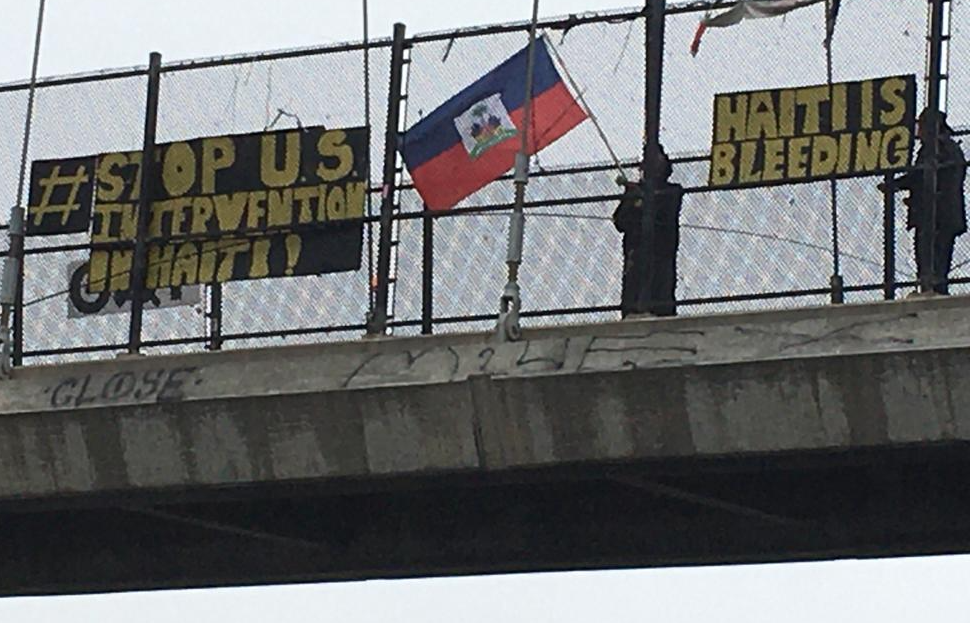 The freeway banner drops were done in conjunction with protests on the east coast, along with those in Haiti, making the following demands on the Biden Administration:

Throughout its reign, the Haitian people have taken to the streets by the hundreds of thousands, again and again, to oppose the PHTK dictatorship, facing live ammunition, tear gas, arbitrary arrest, torture, rape, and extrajudicial killings by the Haitian National Police (HNP)– trained by UN occupation officials in Haiti and by the US police, including the NYPD. The HNP has likewise been funded by the US government to the tune of millions of dollars per year, with US funding increasing under the Trump Administration, a move correlating with increasing human rights violations by the HNP. The Biden Administration has likewise continued this support for a police force clearly implicated in massacres in poor neighborhoods, such as Lasalin and Bel Air. Police and regime-backed paralimitlary violence have displaced thousands of people who have been forced from their neighborhoods after their homes have been burned down and their relatives and neighbors have been massacred.

Since the assassination of Jovenel Moise, the Biden Administration has continued to support the PHTK regime to maintain its grip in power, calling for increased funding for the regime’s police. Additionally, the Biden Administration continues to back the regime’s plans to hold elections this September, against the wishes of the Haitian majority who recognize clearly that no fair and free elections are possible under the PHTK dictatorship.

According to Pierre Labossiere, co-founder of the SF Bay-Area based Haiti Action Committee: “The Haitian people are in the streets, demanding their basic human rights, genuine democracy, and the right to true independence from foreign domination. We cannot allow tax dollars to perpetuate misery and massacres in Haiti. Black Lives Matter! From Haiti to the Bay!”

The function of the PHTK dictatorship is to favor upper class and corporate interests at the expense of the poor majority. The regime is notorious for the massive looting of public funds, for facilitating land grabs  and the dispossession of Haitian farmers, as well as for further enabling the plunder of Haiti’s vast natural resources (gold, petroleum, bauxite and more) by domestic oligarchs and foreign corporations. The “open” investment climate supported by the PHTK regime is noted in this 2018 US State Department Report on “doing business in Haiti”.

US support for the PHTK dictatorship is consistent with the long track record of US intervention in Haiti, from opposing the Haitian revolution in 1804 to invading and occupying Haiti in the early 20th century, from propping up the Duvalier dictatorship between the 1950s and 1980s to backing two violent coup d’etats against the democratically elected, popular President Jean-Bertrand Aristide in 1991 and again in 2004. The PHTK dictatorship is the institutionalization of this last coup, waging a one-sided war of repression–  funded by  US tax dollars– against the popular movement led by Fanmi Lavalas, the political party based on speaking to the needs of the poor majority.