Haiti Action Committee is honored to distribute this message of solidarity from peasant organizations in Haiti. It has been translated from the original Kreyol version. As the signers so clearly state, “Hand in hand, let us struggle together to eradicate racism and injustice.” From Haiti to the U.S. – One Struggle, One Fight.

We Stand In Solidarity To Demand An End To Police Terror

1) Breonna Taylor, who the police in Kentucky killed inside her home.

2) Ahmaud Arbery in Georgia who was killed by two racist whites connected with the police.

The police in Haiti act with the same brutality against the Haitian people, especially when we demand our rights guaranteed by the Constitution. Here are the names of some of the people who the police in Haiti assassinated in the past several days:

2) May 22, 2020 – Louis, an employee of the Ministry for Social Affairs, shot by the police while on his way to buy milk for his child.

3) May 16, 2020 – James, a young man on St. Martin St., shot by a police armored vehicle as he was helping his brother, who had difficulty walking, cross the street.

4) May 10, 2020 – Two young men killed as a police armored vehicle opened fire on a group of young men on Dechant St. in the area of Pont-Rouge.

5) We cannot forget Roberto Badio Thelusma, 14 years old. The police shot him in February 2019 as he was helping his mother with her soft drinks business.

These crimes were committed just in Port-au-Prince alone. It is the police from the US and Canada that train the police of Haiti.

Hand in hand, let us struggle together to eradicate racism and injustice.

Signers below are Representatives of Peasant Organizations: 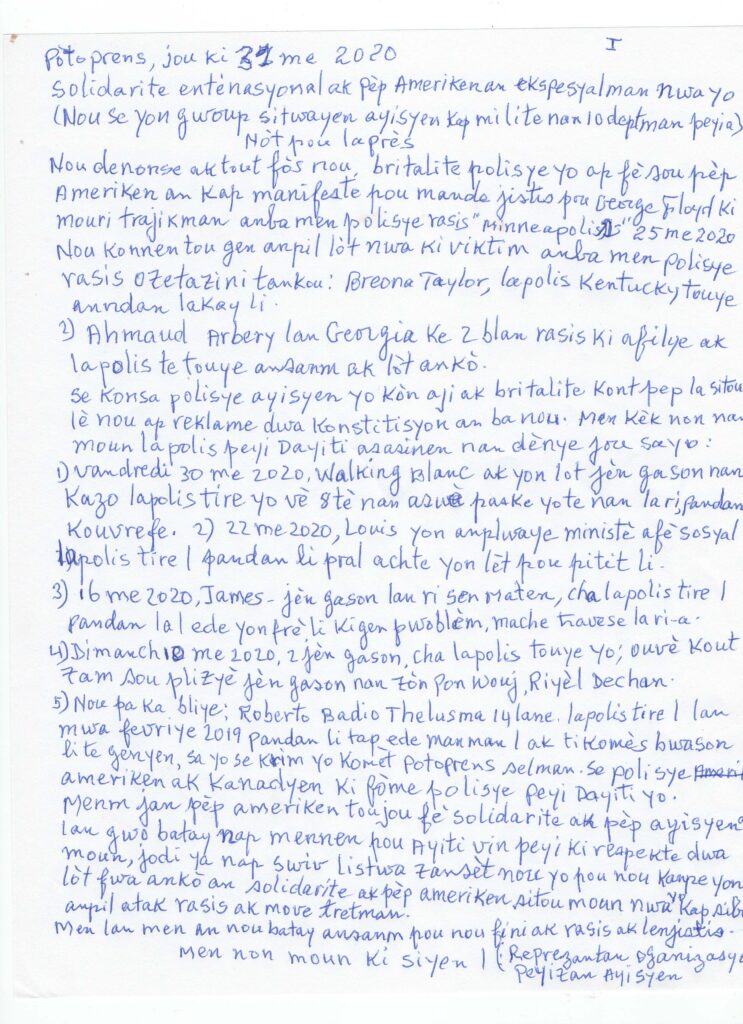