2/2/21: Haiti Action Committee Statement on the Treatment of Christian Laporte and Vladimir Fardin by US Immigration Authorities 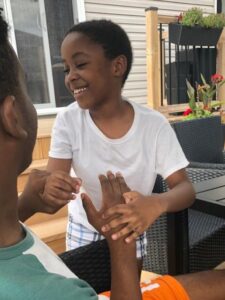 On January 17th, 2021, the US Customs and Border Protection (CPD) authorities at San Francisco airport detained two Haitian brothers, Christian Laporte (age 19) and Vladimir Fardin (age 9) despite the fact that they had valid visas to enter the US. Christian had a student visa to study at Diablo Valley College and Vladimir had a tourist visa to accompany his older brother. After being detained, the two brothers were denied access to counsel and not allowed to speak with their families.

Officials revoked Christian’s visa over a paperwork issue that could have been resolved following the MLK holiday. Instead, officials separated the two brothers, forcing Christian to leave the US on January 19th, while labeling Vladimir an “unaccompanied minor” and transferring him into the custody of ICE. Vladimir was then sent to a government-run shelter for “unaccompanied minors” in San Diego where he was held for more than a week, at risk of exposure to COVID-19, before being released and sent back to Haiti. About Vladimir’s release, Francisco Ugarte, SF Public Defenders’ Office, tweeted: “It took several lawyers, three Congressional offices, one protest and immense social media pressure just to get ICE to do the right thing. And it still took them more than a week.”

The trauma that CPD and ICE officials have inflicted on these two brothers and their family members with this act is yet another graphic reflection of the cruelty of the US immigration system. Though the Presidential inauguration on January 20th has raised hopes for major change to this immigration system, it remains to be seen whether or not the new Administration will fully pursue this change.

The cruelty of this event goes deeper still. Why do so many Haitian youth like Christian seek to study abroad? Why do so many Haitians of all ages flee violence and conditions of deepening poverty in Haiti? Why is life becoming more and more unbearable for the impoverished Haitian majority, provoking a flood of refugees? The same government that detains and separates Haitian families seeking to enter the US is also the architect of misery inside of Haiti. It is the US government that has made life so horrific for the people through organizing and funding the coup in 2004 against popularly-elected President Jean-Bertrand Aristide. It is the US government that has since financed fraudulent elections and installed dictatorial puppet regimes, most recently that of the current President Jovenel Moise who has been ruling through decree, paramilitary terror, and brazen corruption. Under President Trump, the US government provided funds, arms and training of the Haitian police, despite its clear involvement in massacres such as the Lasalin Massacre. Will this foreign policy continue under a Biden Administration or will it truly chart a new course?

Other recent examples of unjust US immigration policy impacts on Haitian communities include:

Now is the time for change on all levels in US immigration and foreign policy. Abolish ICE, end deportation flights, renew TPS and DACA, free all detainees, provide restitution and reunification to separated families. Most importantly, end US foreign policies that create the conditions of injustice and poverty that force people to flee their own countries. Haiti Action Committee stands in steadfast solidarity with Christian, Vladimir and all immigrants in their struggle for family unification and just treatment by US immigration authorities, just as we stand in solidarity with the Haitian people in their life-and-death struggle for genuine democracy, human rights, and national liberation.