FOR IMMEDIATE RELEASE: October 6, 2020
Rep. Waters Urges U.S. Ambassador Michele Sison to oppose elections in Haiti until politically motivated attacks against government critics have ceased and all Haitians are able to participate without fear.WASHINGTON, D.C. – Congresswoman Maxine Waters (CA-43), the Chair of the House Financial Services Committee and a long-time friend of Haiti, sent a letter to the Honorable Michele J. Sison, U.S. Ambassador to Haiti, urging her to “use [her] considerable diplomatic experience and influence with the government of Haiti to promote respect for the rule of law and basic human rights and to oppose the organization of elections in Haiti until such time as the widespread politically motivated attacks against government critics in Haiti have ceased; the perpetrators have been held accountable; an independent Provisional Electoral Council can be formed with broad participation by civil society and in accordance with Haiti’s constitution; and all political parties, stakeholders, civil society organizations, and Haitian citizens are able to participate in the elections without fear.” View her original letter HERE. 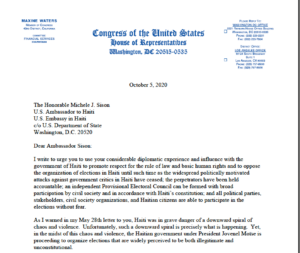 I write to urge you to use your considerable diplomatic experience and influence with the government of Haiti to promote respect for the rule of law and basic human rights and to oppose the organization of elections in Haiti until such time as the widespread politically motivated attacks against government critics in Haiti have ceased; the perpetrators have been held accountable; an independent Provisional Electoral Council can be formed with broad participation by civil society and in accordance with Haiti’s constitution; and all political parties, stakeholders, civil society organizations, and Haitian citizens are able to participate in the elections without fear.

As I warned in my May 28th letter to you, Haiti was in grave danger of a downward spiral of chaos and violence. Unfortunately, such a downward spiral is precisely what is happening. Yet, in the midst of this chaos and violence, the Haitian government under President Jovenel Moïse is proceeding to organize elections that are widely perceived to be both illegitimate and unconstitutional.

The Haitian constitution requires that elections be organized by a Provisional Electoral Council (CEP) that consists of nine members representing different sectors of civil society, including Catholic and Protestant churches, human rights organizations, presidents of universities, and private sector associations. Members of the previous CEP resigned in August and called on the executive branch to initiate a process of dialogue to obtain broad agreement before moving forward with elections. Since then, each of these sectors has refused to designate a representative to a new CEP, expressing concerns about the credibility of any elections carried out under President Jovenel Moïse. The vice president of the Haitian Catholic bishops’ conference even claimed that a government official told him that the church could name the Haitian ambassador to the Holy See if church officials promptly nominated a Catholic representative to the CEP, an offer that the bishop called a bribe.

President Jovenel Moïse nevertheless unilaterally appointed a nine-member CEP by a presidential decree in violation of the constitution. The decree not only mandated the CEP to organize elections, but also required it to prepare a constitutional referendum, a move that Haitian legal scholars, opposition party leaders and human rights observers say is not only illegal and unconstitutional, but reminiscent of actions taken by former dictator Francois “Papa Doc” Duvalier, who changed Haiti’s constitution as part of his efforts to consolidate power, make himself dictator for life, and thus subvert democracy all together. When the Haitian Supreme Court refused to swear in Moïse’s hand-picked CEP members, Moïse installed them anyway, which is also a violation of the constitution.

These disturbing events are taking place against a backdrop of unconscionable threats, intimidation, and violence targeting critics of the government of President Moïse. Haiti’s public works minister Joiseus Nader was accused of intimidation after he went to the offices of the Haitian government’s watchdog agency on September 23, 2020, accompanied by heavily armed men wearing ski masks. While they watched, civilians accompanying them took photographs and videos of some of the 300 employees and sensitive documents that are part of the agency’s ongoing corruption probe of the government’s alleged misuse of $2 billion in aid from Venezuela under the “PetroCaribe” program.

A well-respected Haitian lawyer, constitutional scholar, and head of the Port-au-Prince bar association, Monferrier Dorval, was assassinated on August 28, 2020, just hours after criticizing the government in a radio broadcast. Dorval had previously signed a statement denouncing more than two dozen presidential decrees signed by Moïse and calling for them to be recalled. Dorval’s murder followed the murder of at least two other prominent Haitians, Radio Caraibes host Frantz Adrien Bony and Haitian businessman Michel Saieh; all three were killed over a two-day period.

Violent gang attacks on impoverished neighborhoods perceived to be opposed to the Moïse administration have also escalated in recent months, and there is growing evidence that these appalling acts of violence are being condoned – if not actively encouraged – by Moïse’s government. The death squad headed by Jimmy Cherizier, commonly known as “Barbecue,” reportedly carried out multiple attacks on civilians in May in the impoverished Port-au-Prince neighborhoods of Tokyo, Delmas, and Pont-Rouge, burning houses and killing people. During these violent attacks, members of the Haitian National Police allied with Cherizier reportedly stood by as houses were burned and people were killed.

The government failed to bring Cherizier to justice, and he subsequently unified several gangs under the “G9” organization and launched a reign of terror against neighborhoods unwilling to submit to the gang federation’s will. Police vehicles have been used in the G9 attacks, and there has been no reported police intervention to protect the victims of the attacks, many of whom are women and children. According to a National Human Rights Defense Network (RNDDH) investigation of armed attacks in the impoverished Port-au-Prince neighborhood of Cité Soleil, during the period from June 1 through July 28, 2020, at least 111 people were murdered, 48 people went missing, and 20 others were wounded by bullets. Moreover, 18 women and girls were repeatedly raped by armed bandits, at least 5 public transit vehicles were intercepted, and 6 houses were burned down.

While Moïse has denied ties to the gangs, he fired Justice Minister Lucmane Delile within hours after the latter denounced the gangs and ordered that the national police pursue them. Furthermore, residents of the attacked neighborhoods and human rights groups consistently report that the attacks are designed to intimidate neighborhoods from opposing the government ahead of the upcoming elections.

As you know, I led a delegation to Haiti in April 2019, during which I met with you and also met with residents of La Saline and surrounding areas, who described acts of unconscionable violence that occurred in November of 2018. Survivors expressed concern that government-connected gangs, working with police officers, carried out the attacks to punish the neighborhood for its participation in anti-government protests. In the 18 months since my trip to Haiti, credible investigations of the La Saline massacre by RNDDH, the United Nations (UN) Mission for Justice Support in Haiti together with the Office of the High Commissioner on Human Rights (OHCHR), and Haiti’s national directorate of judicial police have all consistently pointed to politically motivated violence. Yet the alleged perpetrators have never been brought to justice.

I warned in April 2019 that impunity for the La Saline massacre would encourage more violence, and tragically, I have been proven right. A politically motivated attack in the Bel-Air neighborhood on November 4-8, 2019, killed at least 15 people, and it appears to have been carried out by Jimmy Cherizier and other gang leaders implicated in the La Saline massacre. Furthermore, OHCHR verified that Haitian security forces were responsible for at least 19 killings between September 15 and November 1, 2019,15 and Amnesty International reported that Haitian police repeatedly used excessive force during anti-government protests in late 2019, including unlawfully firing live ammunition at protesters and indiscriminately launching tear gas. Impunity for acts of violence in 2018 and 2019 no doubt contributed to the escalation of violence in 2020.

Ending impunity, including for the criminal acts described above; ensuring the protection of human rights; and upholding the rule of law are essential to the democratic process. Any notion that elections can proceed without significant civil dialogue and the bolstering of constitutional protections and democratic institutions is therefore nonsensical.

Credible elections cannot be carried out by a CEP that is widely perceived to be illegitimate and unconstitutional, and they certainly cannot be carried out in an atmosphere of widespread politically motivated attacks against suspected government critics. If the Haitian government were to proceed with elections under the current conditions, respected representatives of civil society will be unwilling to participate, political parties will be unable to organize or recruit candidates, and voters will be afraid to register and vote. Such illegitimate elections would only serve to deepen Haiti’s current political crisis, increase the risks of widespread chaos and violence, and undermine the U.S. national interest in a stable and prosperous Haiti.