On March 30th, 2020, at about 3:00 a.m., six heavily armed men invaded the home of Joel Edouard Vorbe, familiarly known as Pacha, a member of the Executive Committee of Fanmi Lavalas. Terrorizing the occupants, they searched the house looking for Pacha who was not home at the time. They left Pacha a message, saying that they had two bullets left with which 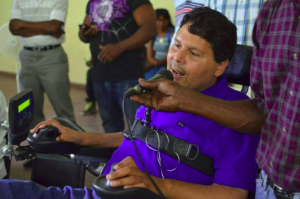 Joel “Pacha” Vorbe is a well-known community leader in Haiti. A victim of an organized wave of violence in 2002 aimed at destabilizing President Aristide’s government, Pacha was shot as he fought off an attack by two assailants who had just murdered his father-in-law.  The attack left him with quadriplegia.  A highly respected leader of Fanmi Lavalas, he is also known for his engagement with organizations that actively work on the problems of people living with disabilities.

The assassination attempt against Pacha occurs at a moment when communities and individuals protesting against corruption by the U.S.-supported government of Jovenel Moise have been the victims of massacres, assassinations, beatings and arbitrary arrests. The newly appointed prime minister, Joseph Jouthe, has indicated that more is to come, warning recently: “Gold for my friends, lead for my enemies and clubs/nightsticks for the undecided.”

All of this is taking place as Haitians are experiencing great fear and concern over the spreading COVID-19 pandemic.

We join the popular movement in Haiti in denouncing the ongoing repression and violations of human rights, and in demanding that the perpetrators be held accountable.

We invite you to read the following Statements denouncing the attack on Joel “Pacha” Vorbe: