Solidarity with the People of Haiti!
End US and UN support of Haitian dictator Jovenel Moise

Please E-mail and tweet the demands below to the following officials and to your Congressional representative and Senators:

● End all support for the dictatorship of Jovenel Moise
● End all recognition of the government of Jovenel Moise as of February 7th, 2021 as required by Haiti’s constitution
● Stop all funding of the criminal Haitian police and security forces

Haiti Action Committee strongly condemns the continued US and UN support for Haitian dictator Jovenel Moise as he flaunts the Haitian constitution and clings to power. Moise has been ruling by decree for months, and is now pushing to enact illegitimate constitutional reforms that would give him even more power. Having come to power through a US-UN supported fraudulent election, denounced widely in Haiti as an “electoral coup,” the Moise regime is now poised to stage another series of phony elections to maintain its stranglehold over the country. We stand in solidarity with the resistance and resolve of Haitians in and outside of Haiti to get rid of this criminal regime.

Even though Moise’s term of office officially ended on February 7th, he has announced his intention to remain in power for one more year, and has launched a major crackdown against any opposition to his rule. Rather than denounce this attack on democracy, a recent statement by US State Department spokesperson Ned Price signaled the Biden Administration’s backing for Moise. Millions of US dollars have been provided to the Moise dictatorship to fund the murderous security forces and impose illegitimate constitutional reforms followed by phony elections as a strategy to keep Moise in power. Jovenel Moise’s rule has been marred by repeated acts of blatant corruption and terror, according to numerous reports by investigative agencies. Atrocities by the regime have been carried out by the US/UN-trained Haitian police and affiliated gangs or death squads with the full backing of high government officials. Community residents protesting the lack of basic services have seen their homes burned to the ground with family and friends massacred, as happened in the Port-au-Prince neighborhoods of Lasalin, Tokyo, Site Vensan, Bele among others.

Under the Moise regime, impunity is the order of the day. Well-known perpetrators with arrest warrants such as Jimmy “Barbecue” Cherizier, wanted in connection with the horrific massacre at Lasalin in 2018, go about freely and even receive police protection. On October 5th, 2020, UN Secretary-General Antonio Guterres blatantly credited the G9 death squad headed by Cherizier with reducing homicides while the G9 was involved in murdering residents of Bele and burning their homes.

We must demand that the new Biden Administration end US support for dictatorship and terror in Haiti.

Please join us in sending this message loud and clear. 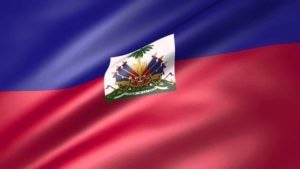 Haiti: Roots of an Uprising