Victims and survivors of the November 2018 massacre in Lasalin speak to a delegation of Haiti solidarity activists from the Bay Area/California. The interview was conducted and recorded by Margaret Prescod for Sojourner Truth Radio and aired on April 5th 2019. Listen: http://bit.ly/2WRWFFc 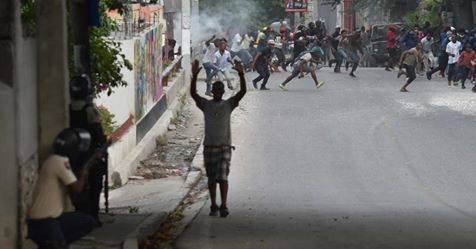 Sojourner Truth: “We visited La Saline, a part of impoverished Port-au-Prince, that has historically been a center of resistance going back to the Haitian Revolution of 1804. Today, it is a stronghold of support for Lavalas, the popular party headed by former President Jean Bertrand Aristide. The massacres have been the largest in Haiti since the July 23, 1987 massacre of peasants under the Duvalier dictatorship. Evidence shows that perpetrators of the massacres have a cozy relationship and backing from the present Haitian government of Jovenel Moise. Indeed, the methods used to torture and kill are reminiscent of the brutal Duvalier days. People are hacked to death. They’re burned alive. Their bodies are left on the street to be eaten by wild pigs and dogs.

It was jarring to hear the stories of the victims. And a reminder: this is happening after a 15-year U.N. occupation of Haiti and under a U.S.-backed regime. The recent mass protests that spread across Haiti were initiated in La Saline. Survivors of the La Saline massacres say they are a pointed attempt to use torture, killings and fear to dampen mass protests, using the people of La Saline as examples to protesters demanding Moise step down. They’re also demanding to “overturn the cauldron,” meaning ending the entire system of corruption and greed. In the lead up to the massacres, the wife of Moise went to La Saline, distributed money widely and met with the local community leader, reportedly in an attempt to corrupt that leader. Residents took the money, but by the end of her visit, it was clear La Saline residents would not support the Moise government and that they intended to continue their protests.”