Haiti Action Committee joins with Haiti’s popular movement to strongly condemn the call for an expanded foreign military occupation of Haiti made on October 7th by US/ UN occupation-imposed prime minister Ariel Henry. Henry obediently followed calls made by the UN Integrated Office in Port-au-Prince the day before for an expanded UN occupation of Haiti and by OAS General Luis Almagro who tweeted that Haiti “must request urgent assistance from the international community to help resolve security crises, determine the characteristics of an international security force.”

We strongly condemn the letter submitted on October 9th by UN Secretary-General Antonio Guterres to the UN Security Council, proposing the deployment of a foreign, armed occupation force to Haiti. And we denounce the Biden Administration’s drafting of a UN Security Council Resolution calling for the immediate deployment of a foreign “rapid action force” in Haiti, as reported on October 15th.

Turning to the UN Security Council, OAS, and United States government to “stabilize” the crisis in Haiti is like pleading with arsonists to put out the fire they’ve ignited.

For more than 18 years now, ever since the US-backed coup d’etat in 2004 against the democratically elected President Jean-Bertrand Aristide, Haiti has been under US/ UN occupation, an occupation that has perpetrated gross human rights abuses including rape and other forms of sexual abuse, an occupation that has brought cholera to Haiti and that has systematically destroyed Haiti’s institutions while increasing ​​hunger and misery. 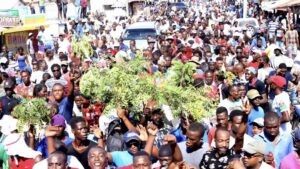 Courageously facing police and paramilitary attacks, the population of Haiti has taken to the streets in ever-growing numbers, demanding their basic human rights and democracy, along with an end to corruption and to the plunder of public resources. They demand an end to US/UN occupation, and an end to the right-wing Haitian Tét Kale Party (PHTK) regime headed by Ariel Henry. They are demanding a transitional government of public safety (Sali Piblik) to create a foundation for free and fair elections and a return to democratic rule. They are demanding an end to IMF-imposed austerity, soaring prices of basic necessities, and declining real wages. Instead, they are demanding that their tax money be invested in education, healthcare, sanitation, clean drinking water, and support for Haiti’s peasant farmers who have been the backbone of local food production.

Moreover, the people are demanding an end to the terror inflicted by the Haitian National Police and paramilitaries, including the G-9 death squad led by ex-police officer Jimmy Cherizier, working with the PHTK regime. They are demanding an end to the proliferation of kidnappings, rape, police killings, and massacres throughout the country, such as the horrific Lasalin massacre. For further testimony regarding this massacre, view this powerful video. The people are protesting the atrocious conditions in Haiti’s prisons and the  skyrocketing rate of prisoner deaths due to starvation, overcrowding, medical neglect and other abuses. All of these injustices have been occurring with total impunity, under the authority of the US/UN occupation.

The US government’s financing of the repressive Haitian National Police (HNP), which has escalated its attacks against unarmed protestors, has been extensive, increasing in correlation with the police’s documented collaboration with paramilitary death squads.  As noted recently, from “2010 to 2020, Washington pumped in $312 million for weapons and training. In 2021, the White House and State Department sent a combined $20 million. In July 2022, the State Department bolstered the SWAT training program with a $48 million package.” All the while, HNP police killings of unarmed Haitians have continued with impunity.

Neither the major, international human rights organizations nor the UN Human Rights Commission are keeping track of the thousands of unarmed Haitians who have been killed and are being killed by the US-imposed PHTK regime’s police and paramilitary affiliates over the last 5 years. This past July alone, more than 500 people were killed in the impoverished neighborhood of Cite Soleil in Port-au-Prince. In a rare development, the US corporate media acknowledged this most recent killing spree, but attributed it to “gang violence”, fitting the convenient racist narrative about Haitians in particular and people of African descent in general. Here are but 3 examples, among hundreds, of recent victims this year who do not exist within the media universe defined by CNN, Fox News, MSNBC etc:

We denounce the arrogance of the UN, OAS, the US government, and the Core Group of imperial powers claiming the role of guardians of the people of Haiti while they fan the flames of repression and violence.

The Haitian people are not fooled by this tragedy and farce; they recognize clearly that arsonists cannot be the firefighters. Only the organized power of the Haitian popular movement can put out the fires ignited by the 2004-coup d’etat and ensuing US/UN occupation.

We call upon people to condemn all foreign intervention in Haiti and to stand in solidarity with the Haitian popular movement in this vital moment.

For more information, contact the Haiti Action Committee at action.haiti@gmail.com

The Power of Education Without Exclusion

France, Pay Your Debt To Haiti!