Update on current events in Haiti: Exploring Haiti’s past and present anti-colonial struggle. A recording of this July 8th webinar can be viewed on Facebook Live 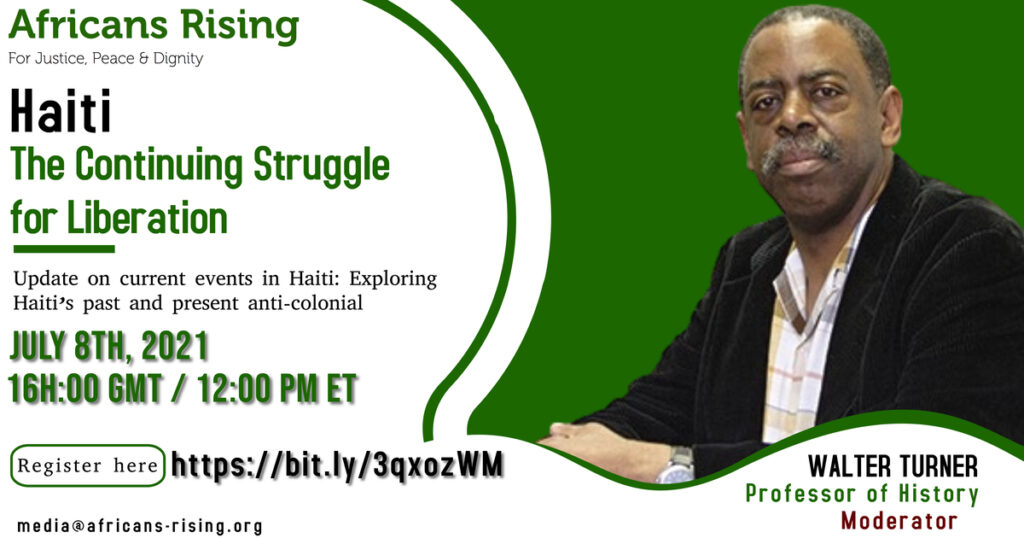 –PIERRE LABOSSIERE
Pierre has worked tirelessly his entire adult life to advance human rights and justice. His primary work has been to support the grassroots Lavalas movement in Haiti. He is the co-founder and leader of the Haiti Action Committee, which has worked for almost 20 years to bring dignity to and improve the lives of the vast majority of Haitians. He fights military repression and supports grassroots activists and political prisoners every way he can. He has been a union activist (ILWU) and a supporter of people’s struggles for justice and dignity throughout the world.

–JOEL EDOUARD VORBE
Joel Edouard Vorbe also known as Pacha Vorbe is a long term well-known activist, organizer and member of the Executive Committee of Fanmi Lavalas. In 2002 Pacha was shot and paralyzed (quadriplegia) by two gunmen. He is a member of the National Council for the Rehabilitation of the Disabled (CONARHAN), an entity which reflects on the problem of people living with disabilities in order to make proposals for public policies to improve their living conditions.

–MARGARET PRESCOD
Margaret Prescod is an activist, author, journalist and radio host. She was a founder of The Black Coalition Fighting Back Serial Murders and of Black Women for Wages for Housework. She is presently the host and executive producer of the Sojourner Truth radio show which is broadcast by KPFK and syndicated by radio stations WPFW (Washington DC) and WBAI in New York City.

–DR. MARYSE NARCISSE
Woman, Mother and Haitian citizen
Physician, Public health Specialist,
UNIFA Board of Trustees member
Dedicated activist for the rights of the most impoverished,
National Coordinator of the Political Organization Fanmi Lavalas,
Candidate of Fanmi Lavalas in the last 2015-2016 presidential elections in Haïti
Dr.Narcisse specialized in Community Health at Bichat University in Paris at first and later in Public Health in the United States.

The Power of Education Without Exclusion

Video: Haiti at the Crossroads